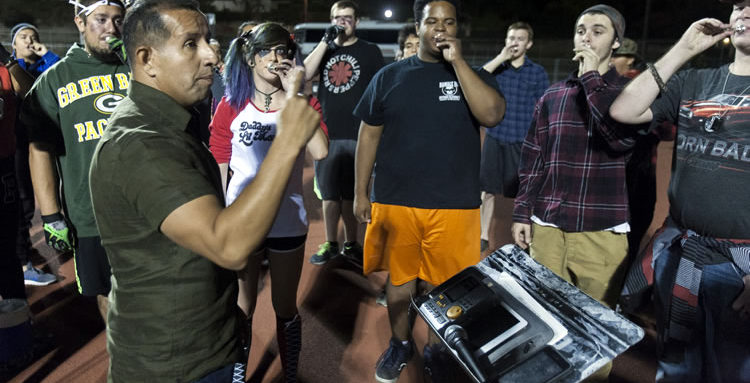 Above: left, James Rocillo, director or the RCC Marching Tigers

Riverside, CA – James Rocillo has been selected to replace Gary Locke as the director of the Riverside City College Marching Tigers.

Locke, and his wife, Sheila, built the program from the ground up and oversaw the group for 32 years. When Locke folded up his baton last June, he ended a career that saw the Marching Tigers selected as the lead unit in every major parade in the world — Rose Parade, Macy’s Thanksgiving Day Parade, Fiesta Bowl Parade, Hollywood Christmas Parade, and the New Year’s Parade in Rome. The group also appeared in several movies and TV shows as well as music videos. Seven times, Locke took the Marching Tigers to the Bands of America Grand National Championships.

“I am honored to have been chosen to continue a rich tradition that was created by Gary and Sheila Locke 32 years ago,” Rocillo said. “I look forward to continuing their work as well as setting new goals and standards.

“I was fortunate to work for the program for almost 10 years under Gary and Sheila, so I understand the work and creativity it took to make this what it is today. Gary and Sheila, in a nutshell, were mother and father, mentors and friends that I am eternally thankful for having in my life.”

Rocillo, who in 2009 became an adjunct faculty member at the College has worked with the Marching Tigers since 2007 as brass caption, began his career at Bell High School in 1987. Most recently he has served as the director of bands at Colony High School in Ontario. Rocillo has over two decades of experience and has been on the staff of such groups as Yamato Drum and Bugle Corps and the six-time DCI Champions Santa Clara Vanguard. In 2008, he joined the brass of the 17-time DCI champions Concord Blue Devils. During his tenure he was part of five DCI World Championships and three Jim Ott Awards for Best Brass Performance.

He is a product of the California community college system, having attended Long Beach City and Citrus colleges. He earned his bachelor of science in Business/Marketing from the University of Phoenix in 2008 and received his master’s degree in Education from National University in 2013. He himself is an internationally accomplished musician. He has been featured in Del-Fi Records’ Brown Bag and the Blue Note Swing Orchestra in addition to leading the James Rocillo Jazz Quartet. His performances have taken him around the Pacific and back again, traveling through California, Hawaii, Canada, and Japan.

“I am so pleased that my friend and colleague has been selected as a member of an exclusive club – becoming only the second-ever director of the historic RCC Marching Tigers,” Locke said. “It is a huge and complex job to step in to, but I know that everything will be in good hands. He is a fine musician, great teacher, a caring person, and he knows the program and the College, so I don’t think the program will miss a beat.

He and the band have a bright future.”