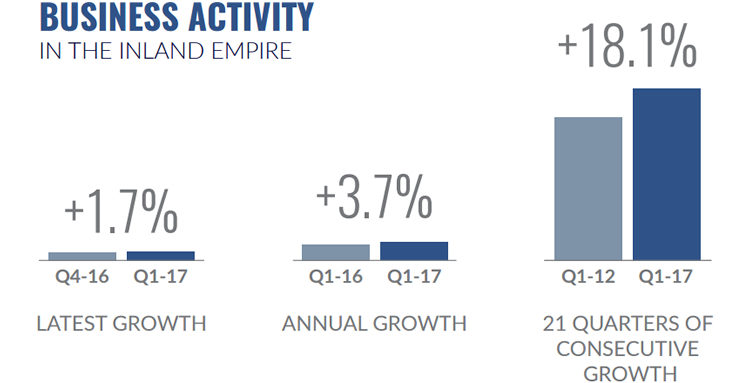 Riverside,  Ca. – The Inland Empire now has a new business activity index dedicated to accurately tracking the performance of the region’s economy on an ongoing basis. Launched today by UC Riverside’s School of Business Center for Economic Forecasting and Development, the new index finds that business activity in the Inland Empire has grown consistently for 21 straight quarters – a streak that began in the first quarter of 2012.

This run of growth represents an 18.1 percent increase in business activity in the region over the past five years and coincides with steady gains in the national economy, which is currently experiencing the third longest economic expansion on record.

“This index is acknowledgement of what we have been seeing for some time, steady improvement in the Inland Empire’s regional economy,” said Robert Kleinhenz, executive director of research at the UCR School of Business Center for Economic Forecasting and Development. “The region also continues to make significant contributions to the growth of the statewide economy, most notably in terms of recent job gains.”

Looking ahead, the Center for Forecasting anticipates business activity in the Inland Empire to increase by 3.1 percent in the second quarter of 2017. The national economy is also expected to grow at a steady pace, as is California’s.

The current Inland Empire Business Activity Index is now available. The Index tracks performance of the Inland Empire regional economy on a quarterly basis and is adjusted for seasonal variations. The composite indicator is estimated using a wide range of economic data including employment, economic output, income, real estate, and other indicators at the national, state, and metropolitan level. The Index is produced entirely by the UC Riverside School of Business Center for Economic Forecasting and Development.