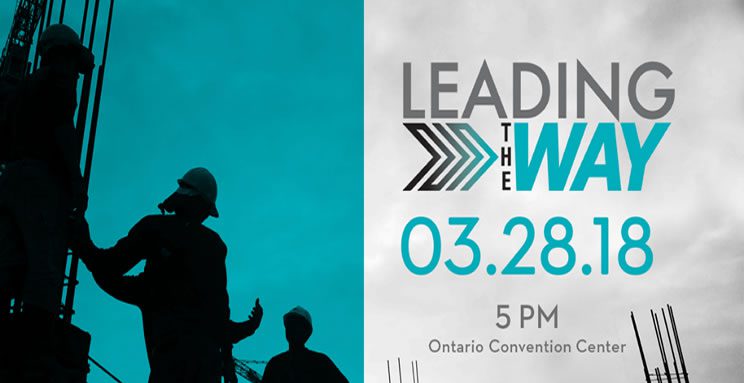 Ontario, CA – Ontario’s annual State of the City: Business Leadership Symposium, will bring together representatives of the business, development, and real estate community. Leaders from all over Southern California will gather on Wednesday, March 28, 2018, at the Ontario Convention Center to be inspired by industry experts and network with the region’s top deal makers.

This year’s theme, Leading The Way, will display how the City of Ontario continues to be the center of it all, while discussing topics on leadership, community, business, tourism, and infrastructure.  Ontario Officials will recap accomplishments and partnerships made over the year and will also give some insight on what to expect in the future.

The 2018 featured speaker is America’s First African American Female Combat Pilot, Vernice “FlyGirl” Armour.  FlyGirl will inspire attendees to make gutsy moves and create breakthrough results within their organizations.  In conjunction with FlyGirl’s presentation, City Officials will discuss Ontario’s commitment to public service; enhancements made in various parks, residential and commercial neighborhoods; give updates on future developments and plans for the City; and show how the City continues to lead the way in making Ontario the most business-friendly City in Southern California.

Leveraging her “Breakthrough Mentality” and “Get Gutsy” mindset, Vernice “FlyGirl” Armour propelled herself from beat cop to combat pilot in a record-breaking three years and became America’s First African American Female Combat Pilot. As featured on CNN, MSNBC, The View, FOX News, Oprah Winfrey and others, FlyGirl’s fresh, edgy style, high, contagious energy and unique, gutsy essence jump off the stage, page and screen and moves people to action. Since 2007, she has inspired countless organizations and individuals to make gutsy moves and create breakthrough results.

A Tennessee native and graduate of Middle Tennessee State University, FlyGirl holds two honorary doctorates, was a Diversity Liaison Officer to the Pentagon for Headquarters Marine Corps and is a member of the COMCAST/NBCUniversal Joint Diversity Council. She has received numerous awards as a pioneering pilot, to include her commanding role in Science, Technology, Engineering and Mathematics (STEM). She was the Marine Corps’ first African American Female pilot, first African American woman on the Nashville Police Department’s motorcycle squad, a Camp Pendleton Female Athlete of the Year and two-time titleholder in their Strongest Warrior Competition, and a running back for the women’s pro football team, the San Diego ‘Sunfire.’

Mark your calendar to attend the most important leadership and networking event in the Inland Empire.

Registration is open and sponsorship opportunities are still available.  For more information and to register, please visit www.ontariosoc.com.

The City of Ontario is Leading The Way in creating urban lifestyle districts that generate sustainable places to live, work, play, and visit. Located just 35 miles east of downtown Los Angeles, the City of Ontario is ideally situated as Southern California’s gateway. With three major interstates, two railroads and the Ontario International Airport, Ontario offers direct access from Los Angeles to the rest of California, and to North America. With approximately 170,000 residents and residential development on the rise, Ontario looks to double its population in the next 20 years, making it one of the 100 most populated Cities in the nation. Complementing its business and residential core, Ontario dazzles with its amenities such as the Ontario Convention Center, Citizens Business Bank Arena, and the Ontario Mills Mall.  To learn more about the City of Ontario, visit www.ontarioca.gov or call (909) 395-2000.

About Ontario’s State of the City