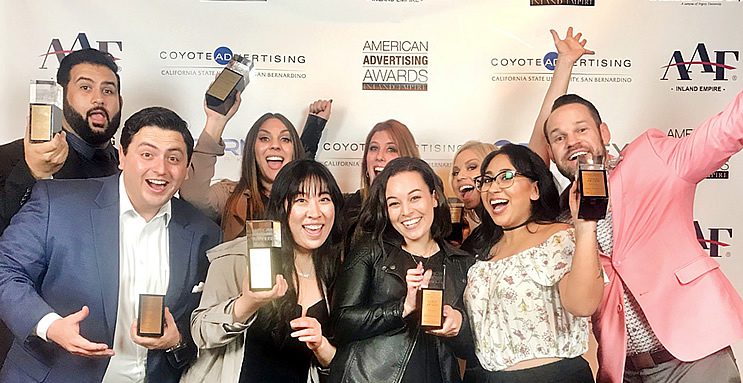 Above Photo – The Pulse Marketing team, won Best of Show and took home a total of six Gold at the American Advertising Awards.

A Selection of Gold Winners:

The San Bernardino County District Attorney’s Office has been recognized with three awards in the 2018 Inland Empire American Advertising ADDY Awards Competition. In the category of “Public Service Online Film, Video & Sound,” the office received a Golden ADDY for Peace Officer Memorial and a Silver Award for Fearless Faith.

“Our goal in all the videos and public service campaigns we create is to keep the public informed about work done by the San Bernardino County District Attorney’s Office,” said District Attorney Mike Ramos. “Whether we are honoring our fallen officers or raising awareness about domestic violence, we hope that the message resonates with the public we serve.”

Coyote Advertising was established in 2010 and is an on-campus multimedia training facility with a mission to prepare Cal State University, San Bernardino (CSUSB) students for 21st century media leadership positions. The on-campus agency is run completely by students and won a Gold in the Professional category for their work on the event “1984 – A Three Part Event”

“It’s not just a club, it’s a real agency where students are working on real-world, paying projects. The students are accountable to our clients, so winning a Gold ADDY is a real achievement for our students and a milestone for our program at CSUSB,” said Jacob Poore, Manager of Coyote Advertising.