Rancho Cucamonga, CA – The City of Rancho Cucamonga was recently honored by Southern California Association of Governments (SCAG) as one of seven award-winners to receive recognition as part of the region-wide SCAG Sustainability Awards Program. The City was recognized for its community-based Sustainable Community Action Plan (Plan) and was awarded the “Green Region” Award at the SCAG 2018 Regional Conference and General Assembly on May 3, 2018, in Indian Wells, California. SCAG is the nation’s largest metropolitan planning organization, representing six counties, 191 cities and more than 18 million residents.  The Plan serves as a roadmap for advancing environmental sustainability in Rancho Cucamonga and, in particular, utilizes a unique triple-bottom line approach to drive comprehensive sustainable change across Rancho Cucamonga’s environment, its economy and community health and equity. Key areas of the Plan include energy and water efficiency, land use and open space, transportation and mobility, green building and waste reduction.

“We are excited to receive this award for the Sustainable Community Action Plan and are thankful to all those that contributed to this vision,” said Deborah Allen, Management Aide for Sustainability with the City of Rancho Cucamonga.

Development of the Plan began in August 2013 when the City of Rancho Cucamonga was awarded a grant in the amount of $150,000 by SCAG. Crucial to the completion of the Plan was an extensive public outreach process which included participation by thousands of residents, local businesses, community organizations, students, City staff and elected officials. The Rancho Cucamonga City Council adopted the Plan in April 2017.

Sustainability efforts for the City are part of the larger Healthy RC initiative established by the City Council in 2008, striving towards advancing a healthy, greener and cleaner Rancho Cucamonga. Since then, sustainability efforts have included city-wide approaches toward embracing renewable energy, environmentally friendly transportation choices, and resource conservation. Next steps include incorporating a publicly-accessible dashboard that will display the City’s progress in implementing the Plan.

The Plan reinforces Rancho Cucamonga not only as an environmentally sustainable leader in the Inland Empire but also allows the City to be an example of change to individuals that live, work and play in the community and region. 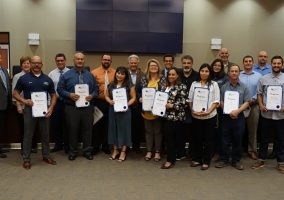