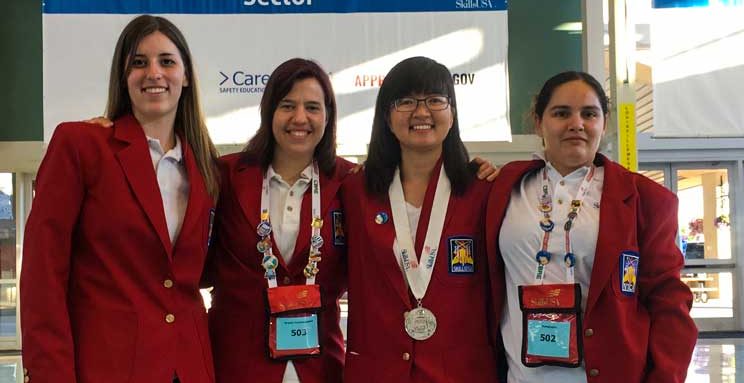 Vu, a foreign exchange student from Vietnam, was one of four students to compete in this year’s National SkillsUSA competition at the Kentucky Exposition Center in Louisville from June 24-28.

“The competition is very meaningful for me,” she said. “Through the competition, I have escaped my self-deprecation. I have also gained more knowledge and interacted with many people in the graphic design industry there. Thanks to the support of my family, advisors and friends, I have overcome my fear and believe in myself.”

Vu may very well be one of the most decorated Applied Digital Media students in the College’s history. In addition to her success at SkillsUSA, she has won the Applied Digital Media & Printing’s Annual Contest three times; earned gold and bronze medals at the Inland Empire American Advertising Awards; received numerous awards from the Graphix Club; and earned 12 scholarships while attending RCC.

“I am very proud of our CTE students who have competed in SkillsUSA on behalf of RCC,” Patrick Scullin, associate professor, Applied Digital Media, said. “They dedicated themselves to the team and to mastering their contest area during the fall and spring semesters. This required personal initiative and many extra hours of practice and study including competing at regionals and state and culminating in a week-long trip to the national competition in Louisville, KY.

“It is especially rewarding to have a student like Vu who works tirelessly to master her craft.”

Other students who competed in the national competition were Kaitlin Thomas (Redlands High School) in Advertising Design; Melody Shumate (Citrus Valley Christian Academy) in Graphic Communications; and Alexa Galindo (Temescal Canyon High School) in Photography. Each of these students won a gold medal in the state competition.

“This year, I was able to compete against the best graphic designers in the United States,” Thomas said. “The education, motivation, courage and self confidence that the Applied Digital Media and Printing faculty have given me throughout my time at RCC is invaluable. Although my time at RCC has come to an end, I am incredibly thankful and honored to have been a part of the 2019 RCC SkillsUSA team.”