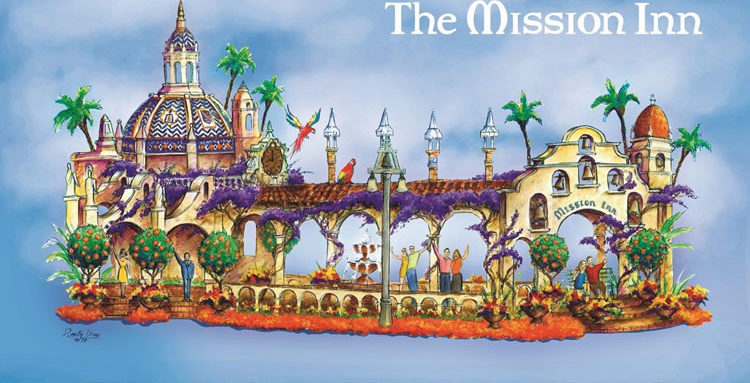 RIVERSIDE, Calif. – The Mission Inn Hotel & Spa, which has drawn millions of people to Riverside during the past 25 years by hosting the annual Festival of Lights, will take center stage on the city’s 2018 Rose Parade float, as seen in a design unveiled for the first time Wednesday (9/20).

The float is Riverside’s first Rose Parade float in nearly 60 years and symbolizes the strong bond between the city and the historic hotel. More than 500,000 people visit Riverside each year during the six-week Festival of Lights, including 75,000 at the annual switch-on ceremony the day after Thanksgiving.

“We are returning to Pasadena to celebrate the 25th year of the Festival of Lights, and to thank Duane and Kelly Roberts for their hard work and immense generosity in creating and growing this annual festival,” Mayor Rusty Bailey said. “There is no doubt in my mind that, if Duane and Kelly Roberts had not re-opened the Mission Inn, and built it and the Festival of Lights to where they are today, we would not be seeing the same success we are enjoying as a community now.”

City officials, business owners, residents and major donors to the float fund gathered Wednesday morning at the Mission Inn to unveil the design. Video of that news conference can be found here: https://www.youtube.com/watch?v=dePLR3RSEP4&t=55s

Mayor Bailey noted that Riverside is thriving, and that much of that current success can be traced back more than two decades to the investment the Roberts’ made in the Mission Inn.

Riverside recently was chosen as the site for the state Air Resources Board’s new $366 million testing facility, and the City of Riverside is developing the Cheech Marin Center for Chicano Art, Culture and Industry, a world-class art museum and cultural center. But Riverside’s downtown struggled for years before the Mission Inn re-opened.

“When Mr. Roberts purchased this hotel in 1992, he did revive the heart and soul of the Riverside downtown,” said Mission Inn Vice President and General Manager Stan Kantowski. “The goal was to establish a cultural and historical ambassador for the region, and what a great ambassador it has become.”

No City of Riverside funds were spent on the float. The $300,000+ needed to prepare the float and pay for assorted other expenses was raised by the Greater Riverside Chambers of Commerce Foundation.

Andrew Walcker, Board Chairman for the Chamber, said the Festival of Lights has provided amazing opportunities to showcase Riverside to visitors, existing and potential businesses, and residents.

“The theme for the 2018 Rose Parade is ‘Making a Difference,’ and Duane and Kelly Roberts have certainly made a difference in Riverside,” Mayor Pro Tem Jim Perry said.