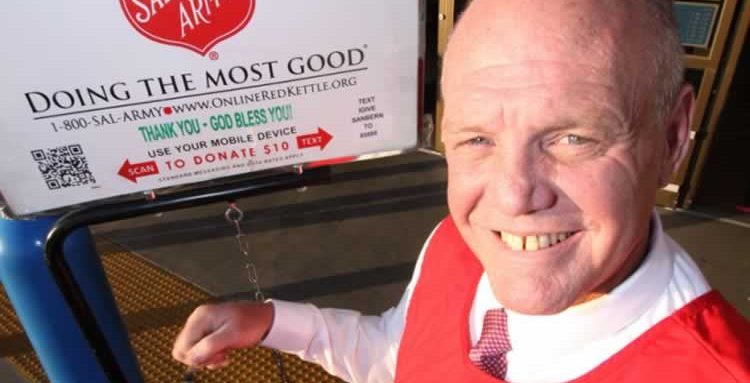 Photo above: Steve Pinckney has volunteered his time to Ring the Bells as part of his ministry work with the Salvation Army Corps.

[ecko_quote source=”Major Daniel Henderson. “]Our goal is to raise $150,000 this year to help families have a Happy Christmas and to house the homeless, feed the hungry, and provide hope to the hopeless.[/ecko_quote]

“This is our major fundraiser for the year. Last year we raised about $100,000 during the holiday season. We are looking for volunteers to Ring the Bells and raise money for The Salvation Army to help the needy this holiday season,” said Major Henderson. “When volunteers ‘Ring the Bells’ it increases the amount of money The Salvation Army has to help people in need.”

President Tomas Morales of California State University, San Bernardino and President Matthew Madrid of The Art Institute of California – Inland Empire are asking their students, staff and faculty to join the effort to Ring the Bells and help our local people in need.

“Assemblymember Cheryl Brown along with San Bernardino City Councilmember John Valdivia are the first elected officials who have volunteered to Ring the Bells this holiday season,” said Major Henderson. Stater Bros. Markets, Under Armour and Target are also providing volunteers.

Festively-dressed volunteers ringing bells will be deployed to retail outlets in San Bernardino, Grand Terrace, Highland, Colton, Rialto and Bloomington. “Some sing, some dance, some play instruments and some just use their wonderful smiles and the familiar silver bells to attract donations,” said Major Henderson.

The tradition of The Salvation Army “Kettle” during the Christmas Holidays was started in 1891 in San Francisco, by Captain Joseph McFee, in an effort to collect enough money to provide a free Christmas dinner to the poor. Now the tradition has spread worldwide. It has been in San Bernardino since its early years.

Donations collected during the Christmas kettle campaign in San Bernardino are used to provide food baskets and other essential during the Christmas season. Donations are also used by The Salvation Army throughout the year to provide emergency services including food; lodging for homeless or displaced families; clothing and furniture; children’s afterschool and summer camp programs, assistance with rent or mortgage and transportation when funds are available.

The Salvation Army also needs donations of toys for children’s Christmas gifts, along with turkeys, hams, stuffing, canned goods, vegetables, pies, cakes and other food for Thanksgiving and Christmas dinners and food baskets.

To volunteer, or if companies who want to donate the staffing of a location to Ring the Bells and help the needy this holiday season, call Lt. Cathie McCulley at The San Bernardino Salvation Army at (909) 888-1336.

More stories about the Salvation Army 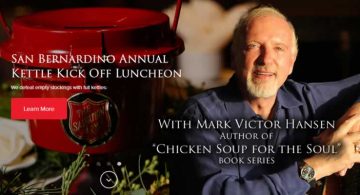 Fill a Kettle, Fight for Good with Chicken Soup for the Soul Author, Mark Victor Hansen

By Press Release
We are delighted to announce that our Annual Christmas Kettle Kick-Off Luncheon will be held on November 15th, 2018 from 11:30am-1:00pm at the Arrowhead Country Club at 3433 Parkside Dr,...

A Christmas Tradition Continues at The Salvation Army