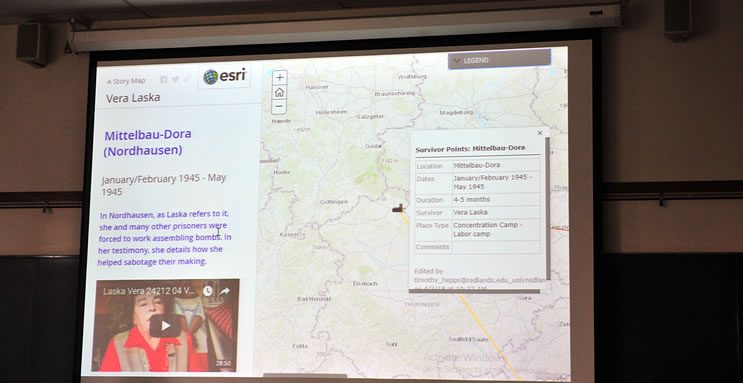 Redlands, Ca – Students at the University of Redlands are using GIS mapping technology to retell stories of systematic persecution, courage, and resilience shared by those who survived one of history’s most horrific genocides.

In her English course, “Representing the Holocaust,” Professor Sharon Oster engages students by having them virtually meet survivors through recorded interviews and then travel their individual journeys by mapping them with GIS technology. Through this innovative method, combined with traditional reading and research, Oster believes students experience a greater understanding of the Holocaust. “While the focus of the course is on literature — published survivor memoirs — this project broadens the range of stories they study, incorporates organic historical research into the course, and provides a sense of scale of the events, both temporal and spatial perspectives for each individual story,” she said.

Students listen to survivors’ testimonials, videotaped and archived by the USC Shoah Foundation Video History Archive, research the information learned, and map the locations noted in the narratives. Using Esri Story Maps, the students map the survivors’ journeys and translate their narratives visually using custom map symbols, defined in a legend, to represent what happened at each location. Combined with survivor quotes, images, and video clips of the testimonials, the Story Maps become interactive multimedia representations of the Holocaust survivors’ experiences. Those new representations of survivors’ stories are key, students said, to the next generation’s understanding of the Holocaust.

Student Leah Volchok ‘21 said her greatest takeaway was the opportunity to create her own connection to the past. “As the future generation, we can make story maps to connect us to our ancestors and remember what happened in the past to prevent it from happening in the future.”

Oster said one of the greatest impacts of the exercise is an appreciation of the scale of the Holocaust — as a series of historical events understood through one individual’s forced odyssey. “By mapping the survivors’ journeys, students learn how extensive the Holocaust was, and how innocent people were forced from their homes, dispossessed of all of their belongings, and moved among ghettos, camps, and other internment sites. Students also see a wider range of the victims singled out for racial extermination: the majority were Jewish (and labeled as such for the purposes of persecution), but the students also studied narratives by individuals criminalized as homosexual and as resistance fighters.”

Senior Ryan Shuman ‘18 knew the stories all too well. The video testimony he heard and researched was that of his grandmother, Liliane Shuman. “I knew quite a bit going into the class. Mapping helped me conceptualize the chaos of the Holocaust and ‘see’ a story that I had only ever heard verbally.”

Other students came into the class knowing very little of the Holocaust, like senior Rebecca Wright ’18, whose knowledge was limited to reading Night by Eli Wiesel. “I knew some of the atrocities,” she said, “but not the scale.” She was surprised to learn of “the extent of Hitler’s commitment to the extermination of people he found undesirable,” and of the abundance of camps and their locations.

Many published accounts, Oster said, are written by survivors of the Auschwitz death camp, so many students had only heard of that one concentration camp before starting the project. “The mapping changed [the students’] sense of geography, and of the great distances that innocent individuals were forced to travel and move as a consequence of persecution, some never to return to their birthplaces or homes. They came to see the broad scope and scale of the Holocaust by studying one case in fine detail, and then from there, extrapolating that sense by roughly six million and more.”

This year, students presented their completed interactive multimedia stories to their peers, University faculty and the community on Holocaust Remembrance Day.

The University of Redlands is a private, nonprofit university that connects students to a world of opportunity, geared toward their passions and potential. Centrally located near the beaches, mountains and desert in the heart of Southern California, the University offers more than 50 undergraduate programs, as well as 20 graduate programs in business, communicative disorders, education, geographic information systems and music—blending liberal arts and professional programs, applied and theoretical study, traditional majors, and self-designed curricula.