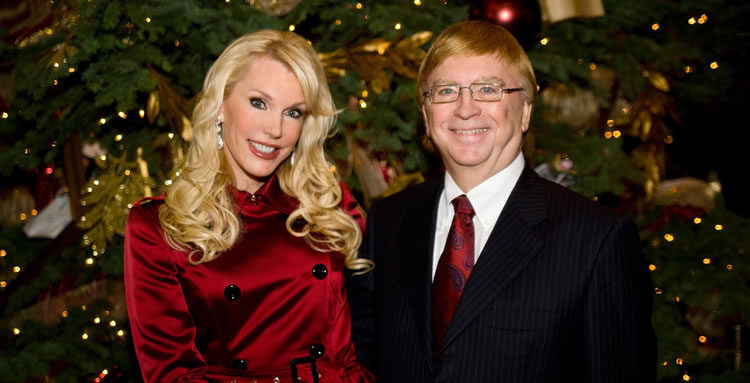 Riverside, CA – Historic Hotels of America, the official program of the National Trust for Historic Preservation for recognizing and celebrating the finest historic hotels, is presenting the 2017 Historic Hotels of America Lifetime Achievement Award to Duane and Kelly Roberts, owners of the Mission Inn Hotel & Spa (1876) in Riverside, California. This prestigious Lifetime Achievement Award will be presented at the 2017 Historic Hotels Annual Awards of Excellence Ceremony & Gala on September 28, 2017, at The Omni Homestead Resort (1766) in Hot Springs, Virginia. This award is presented to individuals who are dedicated to the preservation and stewardship of legendary historic hotels over many years.

Since 1992, Duane and Kelly Roberts have contributed significantly to the preservation, restoration, recognition and celebration of The Mission Inn Hotel & Spa in Riverside, California. Their dedication of time and resources continues to enhance this historic hotel which was previously designated a National Historic Landmark by the U.S. Secretary of the Interior. Since their purchase of this legendary historic hotel in 1992, they have re-invested all operational profits back into the hotel to continue its legacy. Twenty-five years ago, the Roberts created and funded the acclaimed Festival of Lights annual holiday event where visitors can enjoy more than five million dazzling holiday lights and animated characters. This event shares the beauty and history of the Mission Inn Hotel & Spa. Building on the success of the Festival of Lights, the Roberts created a new festival, Festa dell’ Amore, to celebrate romance for the entire month of February in Riverside.

“We are delighted to honor Duane and Kelly Roberts with the 2017 Historic Hotels of America Lifetime Achievement Award. Future generations will continue to benefit from their leadership and philanthropy in preserving, strengthening, revitalizing, and honoring the unique cultural and heritage treasures of Riverside, California,” said Lawrence Horwitz, Executive Director, Historic Hotels of America and Historic Hotels Worldwide. “They saved a National Historic Landmark from demolition and continue to inspire others with their creativity, enthusiasm, and generosity.”

“We are incredibly honored to receive this award and we thank Lawrence Horwitz and Historic Hotels of America for bestowing this huge honor upon us,” said Duane and Kelly Roberts. They continued, “We are proud to be members of this prestigious community and it is great to be recognized amongst the greatest hotels in the United States. We are so proud of the accomplishments we have achieved since saving The Mission Inn Hotel & Spa and it has been an amazing honor to be the Keepers of the Inn at this iconic luxury hotel.”

“Duane & Kelly Roberts are truly deserving of the Historic Hotels of America Lifetime Achievement Award for the 2017 Awards of Excellence. Their passion and dedication to conserving and revitalizing The Mission Inn Hotel & Spa along with the local community is an achievement that merits recognition,” states Riverside Mayor, William “Rusty” Bailey.

About Historic Hotels of America®

About The Mission Inn Hotel & Spa

Dating back to 1876, the AAA Four Diamond, Historic Mission Inn Hotel & Spa incorporates design elements from throughout the southwestern United States, Mexico and several Mediterranean countries. The hotel features 238 guest rooms, including 27 suites, and four restaurants. The hotel is situated on an entire city block of the quaint Mission Inn District of Riverside, California, Will Rogers, the well-known comedian, cowboy, and philosopher was a frequent visitor to The Mission Inn in the 1920’s and 1930’s. During his stay at The Mission Inn in 1933 while filming a movie, he remarked: “It is the most unique hotel in America. It’s a monastery, a museum, a fine hotel, a home, a boardinghouse, a mission, an art gallery and an aviator’s shrine. It combines the best features of all of the above. If you are ever in any part of California, don’t miss the famous Mission Inn of Riverside.” Since taking ownership, Mr. and Mrs. Roberts have worked to meticulously update the Mission Inn, preserving the historic look and façade of the hotel and the countless artifacts within its walls, including precious Tiffany® stained glass windows (acquired directly from Louis Comfort Tiffany) in the St. Francis of Assisi Chapel, and the exquisite 100 year-old Kimball Organ in the Grand Parisian Ballroom. Often heralded as one of the most famous representations of Mission Revival architecture in the world, the hotel has built a longstanding reputation among U.S. Presidents, dignitaries and Old Hollywood stars, counting among its famous visitors Barbra Streisand, Bette Davis, Clark Gable, Ronald and Nancy Reagan, Richard Nixon, and Cary Grant, among many others. Previously, The Mission Inn Hotel & Spa was named the Best Historic Hotel (200 – 400 guestrooms category) in the 2016 Historic Hotels Awards of Excellence. In 2016, it was named Best Historic Hotel in the USA Today 10Best Readers’ Choice Awards.