Water Conservation Can Have Unintended Consequences

Riverside, Calif. – Conventional wisdom dictates water conservation can only benefit communities affected by drought. But researchers at the University of California, Riverside have deduced that indoor residential conservation can have unintended consequences in places where systems of wastewater reuse have already been implemented, diminishing both the quantity and quality of influent available for treatment.

The researchers outlined their findings in a recent paper, which appears online in the journal Water Research, published by the International Water Association. 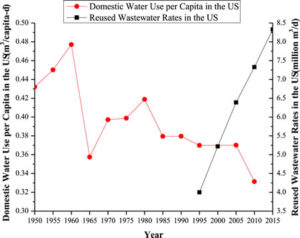 In the past, recycled water was only applied to areas such as low-value crops and median strips, Schwabe said. Recently, however, it has been considered safe to drink provided it either undergoes multiple rounds of treatment to remove concentrations of salts, nutrients, and other contaminants, or is injected into the ground and pumped back out later.

The United States reuses between 10 percent and 15 percent of its wastewater. In regions like Southern California, where effluent flows from inland communities down the Santa Ana River Basin and toward the coast, indoor residential conservation can limit downstream water supplies.

“If people are taking fewer showers and flushing their toilets less frequently, simple water balance dictates there can be reliability issues surrounding the reuse of water in systems such as those we have in Southern California,” Schwabe said.

Exacerbating the problem, as wastewater flows decrease, their levels of salinity and other pollutants increase. Higher levels of pollutants present significant challenges for treatment facilities that are not typically designed to handle “elevated concentrations of total dissolved solids, nitrogen species, and carbon,” according to Tran, Jassby, and Schwabe.

However, the researchers said solutions to those problems are available.

“Cost-effective blending strategies can be implemented to mitigate the water quality effects, increasing the value of the remaining effluent for reuse, whether it be for surface water augmentation; groundwater replenishment; or irrigation of crops, golf courses, or landscapes,” they wrote.