UCR has a $1.35 billion Impact on the Inland Empire 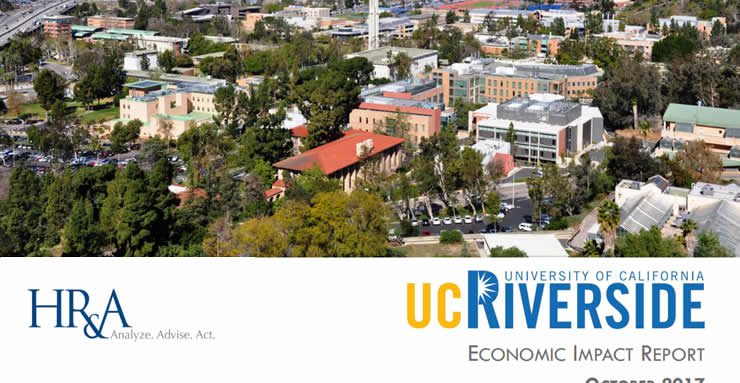 Riverside, CA – UC Riverside generates $2.71 billion in economic activity for the United States, reported in a study commissioned by the University of California, Riverside.

Of that nearly $3 billion total, the UC Riverside had a $1.92 billion impact on California, a $1.35 billion impact on the Inland Empire, and a $1.26 billion impact on Riverside County. The 2015-16 figures are from direct spending by the university, including the impact of wages paid to employees and retirees, as well as goods and services procured by the campus. It also counts spending by students and visitors in the regional economy.

The university is the second largest employer in the city of Riverside. Spending by the campus, its students, visitors, and retirees generates more than 20,700 full-time jobs statewide and 25,000 nationwide, according to the report.

The study, conducted by HR&A Advisors, also shows that UC Riverside pays $550 million in wages and benefits to its 12,400 employees, which includes approximately 4,300 part-time student workers.

“Along with our education and research missions, one of UCR’s fundamental responsibilities is to serve as an engine for economic opportunity in the region and the state,” said UC Riverside Chancellor Kim A. Wilcox. “This report not only quantifies the progress we’ve made, but also sets a benchmark for what I predict is even greater impact in the future. UCR is fulfilling the great promise of a modern research university.”

Calling the university a “critical economic asset” and “an important driver of growth,” the report’s authors lauded UCR for its role as the premier higher education institution for the fast-growing Inland Southern California area. The report praised the school’s push for increased student enrollment, a new faculty hiring spree, and major capital projects on the horizon.

Amitabh Barthakur, a partner at HR&A, compared UCR to a large corporation.

“UC Riverside is located in a part of Southern California which has issues around unemployment and economic opportunity,” Barthakur said. “The university plays a big role in making sure those issues are tackled head-on. The student body and the graduation rates really affect that.”

In 2016, the institution enrolled a record 22,921 students, comprising 19,799 undergraduates and 3,122 graduate students. Most notably, the university has continued its mission of educating a diverse student body, represented by the 63 percent of undergraduates who are first-generation college students. Fifty-four percent of UCR students were classified as underrepresented minorities in 2016, compared to 37 percent across the UC system.

The report emphasized the high economic mobility of UCR graduates. According to the report, 30 percent of students moved up two or more income quintiles.

On the research front, UC Riverside is making leaps in terms of securing money for research projects. The university has seen a 43 percent increase in federal funding since 2012, bringing in a total of $101 million in 2016. Overall, the university received $140 million in research funding for the year, with the other grants coming from nonprofits, industry, and state government.

The report also highlighted the Center for Environmental Research and Technology (CE-CERT) under the Bourns College of Engineering, noting that it drove the relocation of the California Air Resources Board to relocate its Southern California headquarters and research facility to Riverside.

UCR’s School of Medicine, which enrolled its first class in 2013, will create economic waves for years to come, according to the report. The authors noted that the school fills a medical void in Inland Southern California, which they described as “the most medically underserved region in California,” according to the California Health Care Foundation. 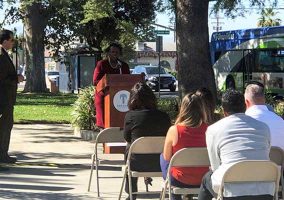