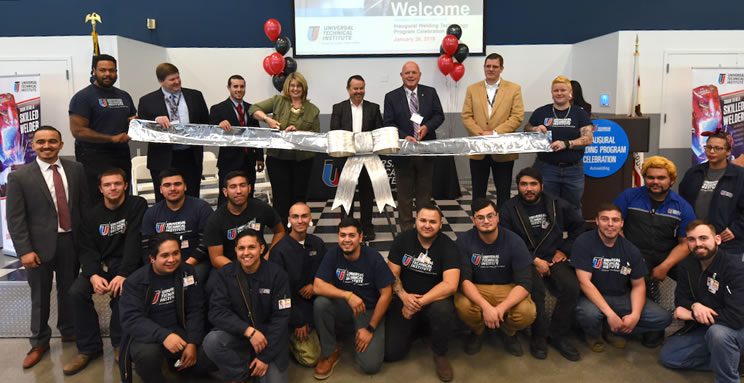 Rancho Cucamonga, CA – On Jan. 26, 2018, more than 60 guests attended a VIP reception to celebrate the inaugural Welding Technology Program at Universal Technical Institute (UTI) – Rancho Cucamonga. It is the first in the school’s nationwide 12-campus network and was launched in partnership with industry leader Lincoln Electric.

“We are filled with pride to see the students enrolled in this welding program grow in their skills and are here to celebrate their accomplishments and our partnership with Lincoln Electric,” said Roger Speer, president of the UTI Rancho campus and vice president of operations for UTI’s Region III. “There is an incredible demand for skilled welders in the Inland Empire and this program along with the advanced welding technology provided by Lincoln Electric offers them the best opportunity for success in the industry.” The inaugural class welded works of art that were raffled off for attendees to take home with them.

The audience of local and regional education representatives, employer partners and community leaders joined UTI’s staff, instructors and inaugural class of students to celebrate. They all watched as the honorable City of Rancho Cucamonga Mayor L. Dennis Michael and County of San Bernardino Second District Supervisor Janice Rutherford addressed the group about the demand for welders, regional economic impacts, and cut through a custom 6-ft. steel ribbon.

“Technical careers are the backbone of our region’s economy, and as a city, we feel secure knowing that UTI is dedicated to educating our local workforce in order to bridge that gap,” said Mayor L. Dennis Michael.

“Our region is one of the fastest growing in the nation for jobs, and while many young people have been leaving the state to pursue their careers, I hope that you will stay and fill one of the many positions,” said County of San Bernardino Second District Supervisor Janice Rutherford. Following the celebration, guests were given the opportunity to tour the new state-of-the-industry welding lab and put their own welding skills to the test with hands-on demonstrations using VRTEX 360 virtual reality training machines.

Welders are increasingly in demand in industries ranging from automotive fabrication and motorsports to aerospace, energy and virtually every kind of manufacturing. Between 2016 and 2026 industry will need to fill more than 458,000 new and replacement positions.[1]

This is just the beginning. In March 2018, the inaugural class will graduate with the UTI Advantage – “Chosen by Industry. Ready for Work.”

[1] Source: Based on data compiled from the U.S. Bureau of Labor Statistics, Employment Projections, www.bls.gov, viewed Nov. 2 2017. Included the new number based on the PDFs 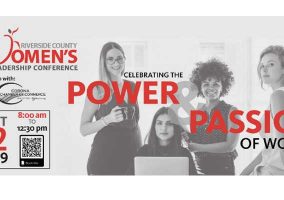 Celebrate the Power and Passion of Women