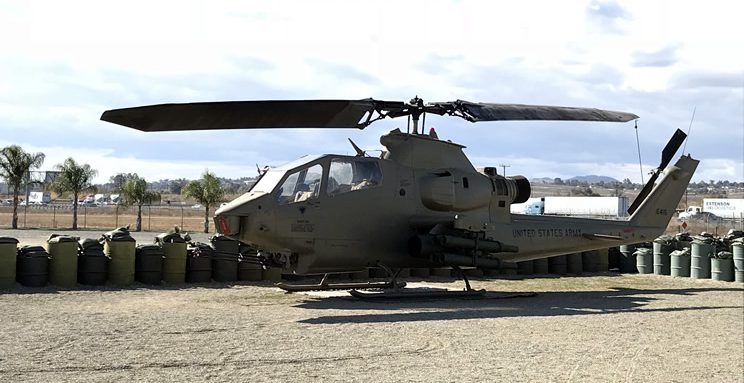 Riverside, Calif. – March Field Air Museum is proud to announce the third installment of an interactive and new program for guests titled “Up-Close Aircraft Days.” A different aircraft will be featured each month, with the next day scheduled for Saturday, March 10, 2018. Guests will have the opportunity for a close look – sometimes climbing stairs to get a close-up view into the cargo bay or cockpit, other times even climbing aboard. The new “Up-Close Aircraft Days” are scheduled to take place on the second Saturday of each month, from 11 a.m. to 3 p.m., throughout the year.

During the upcoming “Up-Close Aircraft Day,” the featured aircraft will actually be a showcase of FIVE helicopters of the Vietnam War. On March 10, visitors to March Field Air Museum will experience these iconic aircraft up close, displayed with open cockpit and cargo compartments in the Museum’s immersive Vietnam Fire Base exhibit. The five featured helicopters include an AH-1F Cobra, a HU-21B Workhorse, an HH-34J Choktaw, an OH-6A Cayuse, and a UH-1B Iroquios.

Forever imprinted on the American subconscious, the distinctive “thwop-thwop” of helicopter blades slapping dense tropic air echoes in our nation’s memory. Controversial and divisive, the conflict in Southeast Asia was many things – but most of all it was a helicopter war. In the early 1960s, the United States faced a determined adversary skilled in the tactics of irregular warfare. Struggling to overcome an enemy who avoided direct conflict, who melted into rice paddies, mountains and jungles whenever conventional forces arrived, required a highly-mobile, rapidly-deployable assault force.

Airmobile Assault, with helicopter transport as the key feature, became the favored solution. Freed from the constraints of road travel, helicopter-borne attack forces made lightning-quick strikes anywhere, anytime. They struck deep into enemy-held provinces, far from supporting bases, and in the thickest jungles and most hostile terrain. As Airmobile units grew, helicopters with specific capabilities came into use.  From the legendary UH-1 Huey Iroquois transports to swift OH-6 Cayuse scouts, to heavily-armed AH-1 Cobra gunships and the supporting HU-21 Workhorse and HH-34J transports and Search and Rescue aircraft, helicopters became a symbol of American power.

To preview the next “Up Close Aircraft Day” happening in April, the C123K Provider cargo aircraft will be featured. Designed to take off and land from short runways in remote locations, the C123 played a central role in some of the most fierce combat during the Vietnam War. Knowledgeable museum docents, dressed in period uniforms whenever possible, will be on hand to assist visitors, provide information and answer questions. The March Field Air Museum website will list upcoming “Up-Close Aircraft Days” and the featured aircraft each month; for more information, visit www.MarchField.org/calendar.