$5 Million for Affordable Housing in Ontario 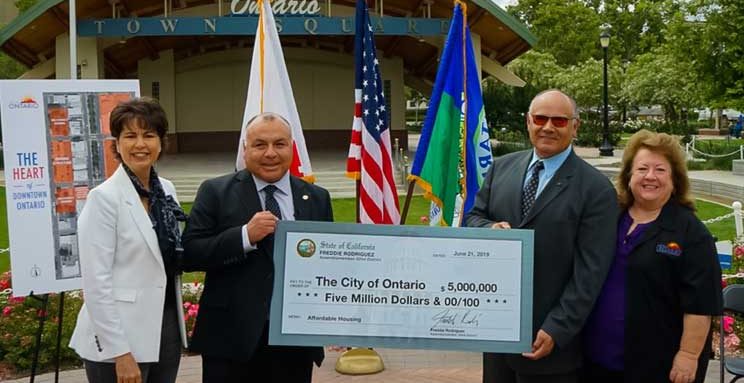 ONTARIO, CA -Assemblymember Freddie Rodriguez joined City and community leaders in celebrating an expected budget allocation of $5,000,000 from the State of California for affordable housing units in the City of Ontario.  The funding, included in the 2019 state budget act which is expected to be signed by Governor Gavin Newsom in the coming days, will help the City of Ontario launch its ambitious new downtown revitalization plan.

The City of Ontario will use the $5 million to help finance workforce attainable housing in the downtown area. The funding helps bring to fruition a City-led development also featuring a technology incubator and workforce development center.  The money is part of the state’s 2019 budget act, adopted June 13 by the State Legislature. It is expected to be signed by Governor Gavin Newsom in the coming days. It builds on a $35 million grant the City received from the California Strategic Growth Council in 2018 to revitalize Ontario’s historic downtown core.

“Too often the Inland Empire is ignored when the State funds priorities like affordable housing- today I am proud to help bring new direct investment into our community.  This $5 million in funding will help drive an ambitious new downtown revitalization effort, bringing jobs, training, and affordable housing.  Our housing supply is one of the main issues I hear about from constituents- I am excited to be partnering with the City on this transformative project” Rodriguez said on Friday.

The Heart of Downtown Ontario revitalization plan will include the following projects:

Assemblymember Rodriguez (Twitter) represents the 52nd Assembly District which includes the cities of Chino, Montclair, Ontario, Pomona and portions of unincorporated Fontana. He is Chair of The Assembly Committee on Public Employment and Retirement, and Vice-Chair of the Inland Empire Caucus.