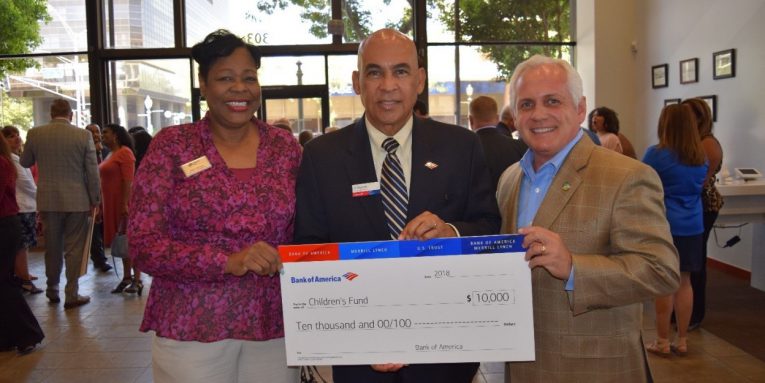 San Bernardino, Ca – Thanks to a $10,000 grant awarded to Children’s Fund by the Bank of America Charitable Foundation, more children with emergency needs will receive assistance.

Children’s Fund receives referrals from community partners requesting assistance for emergency needs such as safe shelter, access to critical food supplies, bunk beds for children sleeping on the floor, refrigerators and other necessities.  The referrals are vetted by Children’s Fund, adhering to rigorous guidelines with the intent to stabilize families and move them toward self-sustainment.  Most requests for aid are fulfilled within 24 hours, ensuring children’s needs are being met as quickly as possible.

“No child should have to go without basic human necessities like shelter, food, clothing or medical care, but so many of us are one emergency or life event away from needing the help of supportive services. We’re proud to support an organization as crucial to the community as Children’s Fund, who assures that children are living in an environment conducive to growth and success,” said Al Arguello, Inland Empire Market President for Bank of America

Recently, the Emergency Needs Program assisted a family of five.  A social worker submitted a request to Children’s Fund on behalf of a single mother of four children, ages 5-12 years old.  The family had been thrown into a period of despair and instability when the father, who was the sole provider, unexpectedly moved out of state leaving his family behind.

The mother did her best to remain positive, but without the viable support, they were soon evicted from their home.  At times they would sleep in a friend’s garage but ultimately, the family’s van became their only source of refuge.  Despite their homelessness, the mother tried to maintain a sense of normalcy.  The children attended school, and while they were there, the mother used the local library to search for a job.

Her efforts paid off as she acquired two part-time jobs.  Soon she had saved the funds for a deposit on an apartment.  The funds she had saved were sufficient for the deposit but she found she was unable to pay the first month’s rent.  Her case manager submitted a request to Children’s Fund for the first month’s rent and a refrigerator.  Until then, the family had been using an ice chest to keep their food fresh.

Children’s Fund approved both requests and the family was able to move into their new home.  The mom said, “Being homeless is something a parent never wants their kids to go through, but knowing that we had so much help and people that cared made the load on my shoulders so much lighter.”

“This is just one story of Children’s Fund being there at the right time to help a family in great need,” says Dr. Ciriaco “Cid” Pinedo, President & CEO of Children’s Fund.  “We’re proud of our ongoing partnership with Bank of America, providing emergency services and helping families prepare for a more financially stable future.”  This year alone Children’s Fund has helped more than 62,000 children in the community.

Founded in 1986 by Patrick Morris and the late Jack Brown, Children’s Fund is a nonprofit whose mission is giving our vulnerable children support, opportunity, and hope by breaking destructive cycles through community partnerships.  Last year, Children’s Fund provided more than 62,000 services to children in need in San Bernardino County and since its inception has facilitated over 1.5 million points of service to children and families. For more information on Children’s Fund or to learn how you can give a child hope for brighter tomorrows, go to www.childrensfund.org or call 909-379.0000.