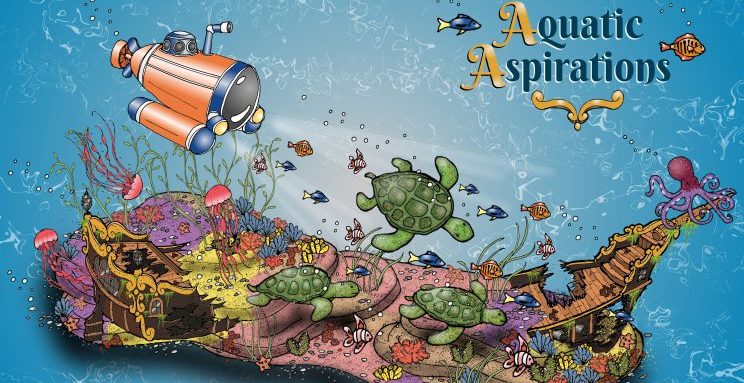 Pomona, Ca – Three giant turtles and an octopus lead a submarine on a fantastic journey on the Cal Poly Universities’ float for the 2020 Rose Parade. The event’s theme is “The Power of Hope.”

The universities’ float, “Aquatic Aspirations,” imagines an optimistic submarine crew looking for lost treasure but instead finds “a breath-taking underwater paradise thriving amongst the pieces of a sunken ship.”

“As Cal Poly students setting off on an exploration into our futures,” said Marilyn Lora, the Cal Poly Pomona design chair and a senior majoring in electronic systems engineering technology, “We never know what treasures we might encounter. The spirit of discovery conveyed by our float embodies the idea that no matter what journey you embark on, hope can be a powerful guide to reaching your own treasure.”

On the sunken ship’s bow at the front of the float, an octopus glides 13-feet high waving its tentacles to the crowds in Pasadena. Giant sea turtles, supersized jellyfish, tropical fish and a ray swim above a vibrant sea floor. A submarine explores the tropical ocean habitat from above.

Animated elements will include turtles moving their flippers, swimming fish, a rocking ray, swaying kelp and a sea creature poking out of a treasure chest, according to Christopher Maciosek, construction chair and a mechanical engineering major at Cal Poly Pomona. The submarine will rock back and forth, spinning its propeller and craning its periscope around. Bubbles will flow from the submarine and shipwreck.

Maciosek’s favorite element is the octopus. “I just think that octopuses are awesome… As the observer in this year’s float, I’ll be rolling down Colorado Boulevard with an overgrown, mechanized octopus 10 feet above my head and clinging onto the bow of a giant shipwreck.”

The Rose Float team is already at work building the float. Cal Poly Pomona has traditionally built the front half of the pod, while students at Cal Poly San Luis Obispo construct the back. The teams will join the two halves in Pomona later in the fall. When complete, the float will be 48 feet long and approximately 27 feet high.

Joshua Lim, president of the Cal Poly Pomona Rose Float team and a senior majoring in electronic systems engineering technology, began volunteering on the Rose Float crew as a first-year transfer student in 2017. This year, he is looking forward to inspiring and training new volunteers.

“I want to show them the magic I felt the first time I stepped into the lab,” he said.

Between Christmas and New Year’s Day, hundreds of students and volunteers will work around the clock to decorate the float with flowers and other natural materials before the entry is seen by millions of viewers around the world as it rolls along the parade route on Jan. 1, 2020.

For more information or to volunteer to work on the float, visit www.rosefloat.org.

The Cal Poly Universities’ float is the only student-designed and student-built entry in the Rose Parade. A joint effort by students at Cal Poly Pomona and Cal Poly San Luis Obispo since 1949, the team has won 59 awards including the 2019 Extraordinaire Award.