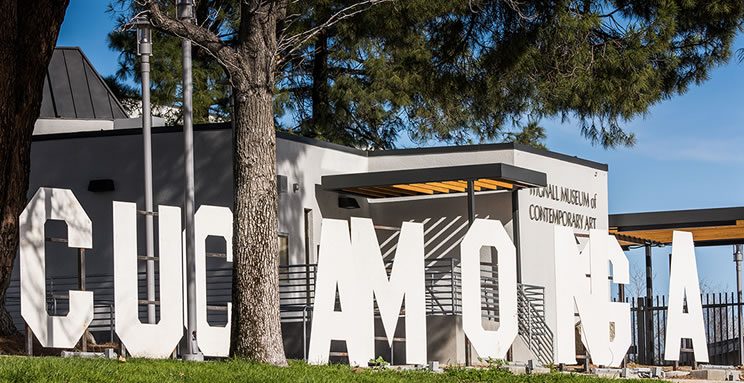 Rancho Cucamonga, CA – Chaffey College will celebrate the completion of its $2.1-million museum renovation project on April 9 by unveiling a sculpture resembling the Hollywood sign and opening an advanced student artwork exhibition.

The renovation – which transformed the museum into a modern gallery space with instructional facilities and an outdoor covered patio – was funded through Measure L, a $230-million bond measure passed by voters in 2002.

“Chaffey College now has an improved space to highlight artists whose talents were refined here or elsewhere in the world,” said Superintendent/President Henry Shannon. “We remain grateful to the cities we serve for making this project possible and invite members of the community to share in the excitement with us.”

Rebecca Trawick, director and curator of the museum, said the new space will further enhance art instruction at Chaffey, boost community engagement and the visibility of the museum on campus.

“The work begs selfies of its viewers,” Trawick said. “Whether visitors for a day or students pursuing a degree before entering the workforce or transferring to a college or university, the work becomes a landmark of our time at Chaffey College.”

The event also marks the opening of the 42nd annual “Student Invitational” exhibition, which is an honors program that showcases student work created during the spring semester.

“The selected artists have worked closely with faculty, museum curators and other arts professionals to create a new body of work, culminating in this professional-quality exhibition,” Trawick said.

The Wignall Museum originally opened in 1972 as the Rex W. Wignall Museum/Gallery, named after an educator who came to Chaffey as a faculty member in the agriculture department and later became director of the college.

What: Art Party! – The grand reopening of the Wignall Museum of Contemporary Art