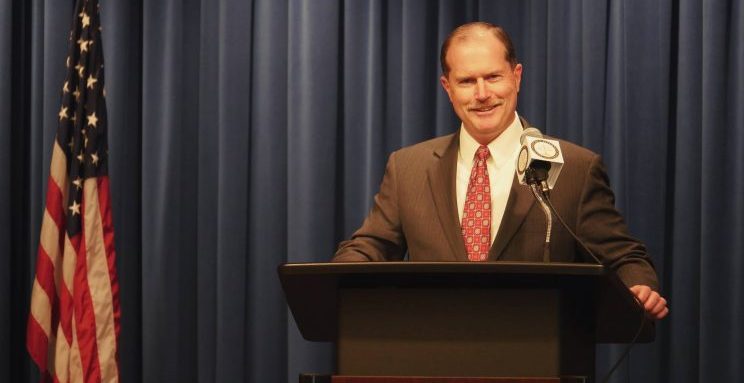 After more than 30 years of service, Riverside County Chief Probation Officer Mark A. Hake will retire on Sept. 12.

Chief Hake led the county’s Probation Department since April 2013. In this position, he manages a staff of approximately 850 employees who supervise nearly 11,000 adult and 1,300 juvenile clients.

“Being selected Chief Probation Officer was one of the proudest moments in my life and over the past six years I have considered it one of my life’s greatest honors to serve the department as its Chief,” said Chief Hake.  “I’m grateful for the opportunity to have led an organization of such dedicated and talented people.”

Chief Hake began his career in 1989 as a Group Counselor at Riverside Juvenile Hall and ascended through the ranks, joining the Executive Management Team in 2009.

Over the course of his career, Chief Hake has been instrumental in shaping the Probation Department’s role in the criminal justice system.  He was part of the group that guided the department though the challenges of the 2011 Public Safety Realignment (AB 109) which shifted adult parole responsibilities from the state to the county level and included significant impacts to local justice system agencies.

Championed by Chief Hake, the department increased the use of youth diversion programs focusing on alternative treatment rather than incarceration, which has been beneficial to youth and their families. Programs such as Wraparound Services, Independent Living Skills, Youth Diversion Team and Home Supervision reduced further entry by youth into the criminal justice system and have led to a sharp decline in juvenile incarceration in the county.

“I’m proud to have been part of the team that built Riverside County Probation into the innovative, progressive and respected agency it is today,” Chief Hake said.  “It’s the right time for a new Chief to come in and take the department to the next level.”