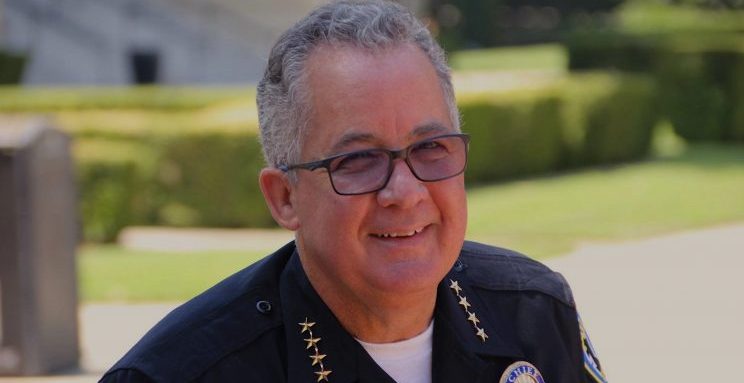 Event scheduled for Sept. 10 at Fox Performing Arts Center to thank Chief Diaz, who is retiring

Riverside, Ca – The public is invited to a community celebration of Riverside Police Chief Sergio Diaz, who is retiring Sept. 15 after nine years leading the Riverside Police Department and more than 40 years of service in law enforcement.

The free event is scheduled for 3:30 p.m. on Sept. 10 at the Fox Performing Arts Center in downtown Riverside. The program will include remarks from elected officials and invited community leaders. A reception will follow.

“There are few roles in our society as challenging as leading a law enforcement agency in a major city,” Mayor Rusty Bailey said. “We have been blessed for the past nine years to have Sergio Diaz as our Police Chief, and I want to personally thank him and his family for their service to our city.”

Diaz has been Police Chief since July 2010, after spending 33 years with the Los Angeles Police Department. As Chief, Diaz focused on reducing crime, enhancing the Department’s relationship with the communities it serves, developing personnel to ever-higher standards of service and achieving greater efficiencies in the delivery of police services.

“As law enforcement professionals, we work in a challenging and ever-changing environment, but we also have great opportunities to impact the community in a positive way,” Diaz said. “I am proud to have had the opportunity to lead RPD during the past nine years, and I look forward to seeing the Department continue to grow and evolve in a positive way.”

Diaz reorganized the Department for greater efficiency and unity of command; increased leadership training throughout the ranks; revamped the system for selecting and rotating employees in specialized assignments; completed the RPD’s strategic five-year plan; initiated a comprehensive review of the RPD manual; and implemented improvements to RPD’s process for selecting supervisors and managers.

He established the Riverside Police Foundation, a non-profit entity to help fund the RPD’s youth programs, because he believes that the most effective and economical way to ensure a safe society is by investing in our youth. Under his leadership, RPD also has become a leader in developing and sharing training on de-escalation tactics to reduce the number and severity of use of force incidents.

“Riverside has been very fortunate to have Chief Diaz at the helm during the past nine years,” Mayor Pro Tem Andy Melendrez said. “This event is a great opportunity for the Riverside community to come out and show its appreciation for what he has done for our Department and our city.”

Diaz said he was proud of how the Department has improved its ability to detect and interrupt terrorist-related violence and mass-shooting threats, while also earning the respect of and sharing information with partner agencies at the local, state and federal levels. RPD also enjoys a great relationship with our city’s two school districts and regularly trains and exchanges information with them to keep students safe.

Diaz has emphasized the importance of working collaboratively with other agencies, organizations and individuals, while defending the police department’s professional independence. These steps have resulted in greater public support and trust for the Department from the communities that it serves, a key to effective law enforcement.

He is a member of the International Association of Chiefs of Police, Police Executive Research Forum, FBI National Academy Associates and the California Police Chiefs Association.

“Chief Diaz has shown exemplary dedication to Riverside and a commitment to community-based policing that is unmatched in Southern California,” City Manager Al Zelinka said. “His commitment to excellence, his ethics and his extensive engagement with the community have served our city very well. Our police department and all Riversiders have benefited greatly from his leadership.”