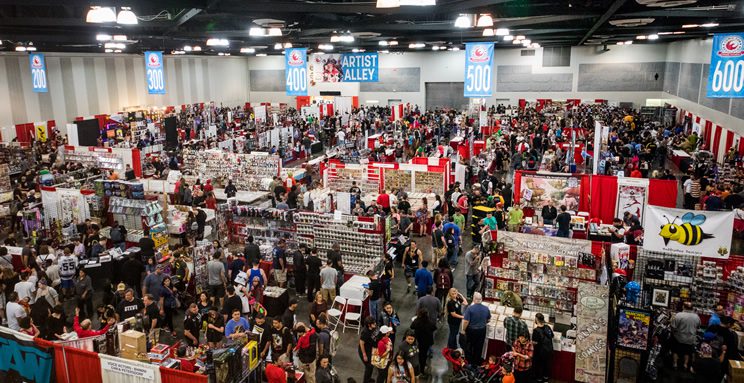 Ontario, CA – The Inland Empire’s only comic book convention, Comic Con Revolution, is back for year 3 when the show returns to the Ontario Convention Center this weekend.  Comic Con Revolution will feature an impressive array of over 200 guests, over 160 exhibitors, 2 full days of programming and the Cosplay Revolution Contest on May 18 & 19.

Attendees will be treated to a wide array of entertainment, including:

Tony Anselmo has been the official voice of Donald Duck! Join us for a historical look back alongside an official Disney Legend!

“Our goal is to make every year of Comic Con Revolution better than the previous year.  With a larger guest list, bigger show floor, stronger programming, easier entry into the convention center and better selection of food choice we have done just that for year 3,” said Atomic Crush Events owner and co-founder Drew Seldin.  “Can’t wait to see everyone this weekend.”

For this year’s show, Atomic Crush Events has unveiled a new interpretation of Jetpack Jules, the official mascot for Comic Con Revolution, by Harley Quinn artist Amanda Conner Comic Con Revolution’s 2019 Official Merchandise, including glasses and t-shirts featuring Conner’s art, is available online and at the show for a limited time while supplies last.

Guests currently scheduled to appear include:

For more information or to order your tickets to Comic Con Revolution https://www.comicconrevolution.com/ontario/

Tickets purchased at the door will be $5 more per ticket.  In addition to the savings, advanced ticket holders will receive a limited edition art print of Jetpack Jules, the CCR mascot, featuring art by Amanda Conner.  Advanced ticket purchases come with a home mailing option as well as allowing ticket holder’s access to the show floor up to one hour early.