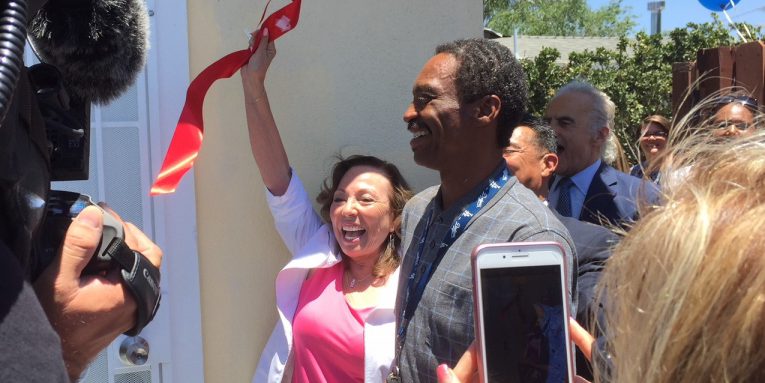 The Board then supported the formation of the Homeless Veteran Community Planning Group (HVCPG) – a group of local agencies that pooled skills and resources to find permanent homes and
provide supportive services for 401 homeless military veterans identified by the Department of Veterans Affairs as living in the county. Five months later, each of the identified veterans had homes.

Yet others, beyond those 401 veterans still needed help. With an effective network and system in place, the HVCPG continued to prioritize homeless veterans.

As a result, Mr. Quintin Sherard is now the 1000th homeless veteran to receive a permanent housing in San Bernardino County.

“Today we celebrate a milestone that exemplifies the success we can achieve through partnerships with a collective and committed focus to house our county’s homeless population,” said San Bernardino County Supervisor Josie Gonzales, who also chairs the county’s Interagency Council on Homelessness.

“I applaud our county’s leadership and Knowledge Education for Your Success (KEYS), U.S. Vets, and LightHouse Social Service Centers who have helped to create a proven network that has now housedour 1,000th homeless Veteran into permanent supportive housing. Thank you for bringing our honored warriors to a place they now call home.”

Mr. Sherard first enrolled in the U.S. VETS Supportive Services for Veterans Families program in 2017, yet while the network was trying to find him housing, he secured a job as a truck driver and fell off the radar. When his employment abruptly ended and Mr. Sherard again found himself sleeping on the streets he reconnected with U.S. VETS and is now being housed through the Permanent Supportive Housing Program.

“The County of San Bernardino in partnership with the community made a promise three years ago to prioritize homeless veterans for housing. As Mr. Sherard moves into his new home today as the 1000th veteran housed by this initiative, he represents the continuing fulfillment of that commitment,” said Philip Mangano, former federal homelessness czar now working with the County’s CEO Office to implement the veterans initiative.

“Our thousandth veteran is a Marine and ending his homelessness confirms the Marine motto, Semper Fi, meaning ‘always faithful’ to helping those who have served,” added Mangano.
Several key agencies are credited for helping the County achieve such success in finding housing and support for homeless veterans. They include LightHouse Social Service Centers, US VETS, and KEYS as well as the United Way, Inland Housing Solutions and many others.

“Collaboration and communication are the keys to ending Veteran Homelessness,” said Karyn YoungLowe, president and CEO of LightHouse Social Service Centers. “This significant achievement would not be possible without the hard work of the Homeless Veteran Community Planning Group and the diligent and persistent support of Supervisor Josie Gonzales and the San Bernardino County Board of Supervisors, County CEO Gary McBride, and the San Bernardino County Advisory Board on Ending Veteran and Chronic Homeless, Tom Hernandez and the Office of Homeless Services, Loma Linda VA, the Housing Authority, 211/CES, Greg Devereaux and Phillip Mangano.”