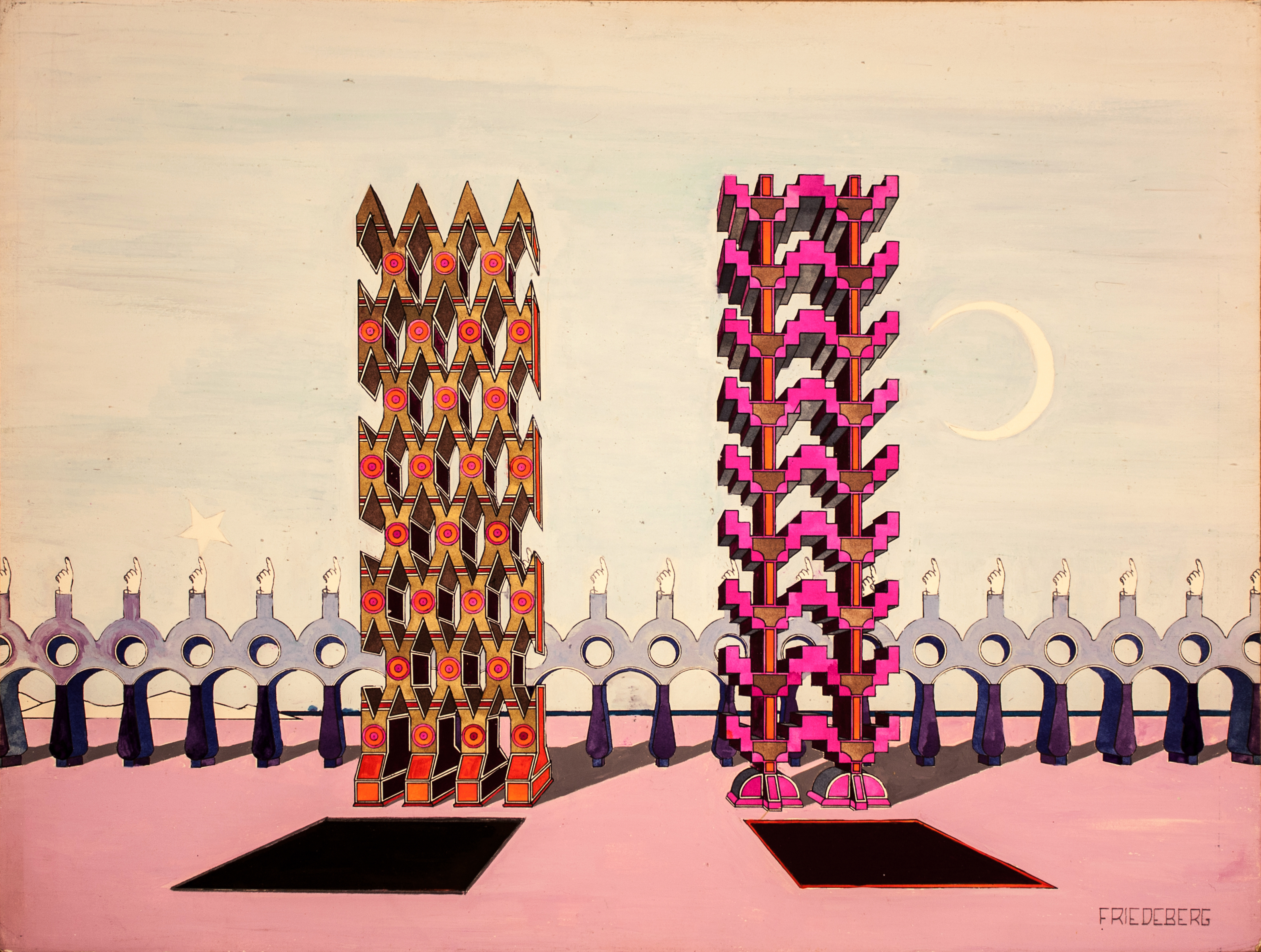 Join internationally-acclaimed artist Pedro Friedeberg in conversation with curator Terri Geis regarding his early work, which is the subject of Impossible Worlds: The Early Works of Pedro Friedeberg, currently on exhibit at the Riverside Art Museum. UCR’s Aleca Le Blanc will moderate.

I get up at the crack of noon and, after watering my pirañas, I breakfast off things Corinthian. Later in the day I partake in an Ionic lunch followed by a Doric nap. On Tuesdays I sketch a volute or two, and perhaps a pediment, if the mood overtakes me. Wednesday I have set aside for anti-meditation. On Thursdays I usually relax whereas on Friday I write autobiographies”

Pedro Friedeberg (b. 1936) is one of the most prominent artists working in Mexico today with a practice that revolves around ornate, often impossible, architectural visions and humorous reflections on society. In a career spanning over six decades, Friedeberg has exhibited widely in Mexico, the United States, and Europe. His work emerged within a generation of artists reacting against the direct political commentary advocated by the Mexican Muralists. During a period of increased experimentation in the 1950s and 1960s, many artists in Mexico sought alternative paths to modernism. They rejected concepts of nationalism and instead connected to the international counterculture’s irreverent mixing of various artistic and philosophical traditions.

Impossible Worlds: The Early Works of Pedro Friedeberg presents the fanciful, imaginative drawings created in the early phase of Friedeberg’s career, from approximately 1953 to 1960. The exhibition features works in graphite, ink, and acrylic from a private collection in Riverside, exhibited publicly for the first time. These artworks, carried out in many different styles and techniques, provide new insights into the development of Friedeberg’s unique vision, which is equally inspired by Mexican and European cultures. The works reveal Friedeberg’s broadly eclectic interests in world history, the rise of mass advertising, and popular entertainment. They also demonstrate the obsessive focus on pattern and repetition that has come to characterize Friedeberg’s artistic production.

This exhibition is curated by Dr. Terri Geis. Geis is curator of academic programs at the Pomona College Museum of Art and her research focuses on post-revolutionary Mexico and intersections between Surrealism and the Americas. Recent projects and publications include “In Wonderland: The Surrealist Adventures of Women Artists in Mexico and the United States” (LACMA, 2012); an essay in Surrealism in Latin America: Vivísimo Muerto (Getty Research Institute, 2012); and contributions to Catalogo comentado del acervo del Museo Nacional de Arte. Pintura, Siglo XX (Museo Nacional de Arte, Mexico, 2014). Forthcoming articles include “Myth, History and Repetition: André Breton and Vodou in Haiti,” (Johns Hopkins University Press). Geis is also working on an exhibition on the Mexican muralist José Clemente Orozco with funding through the Getty’s LA/LA initiative.

The Riverside Art Museum integrates art into the lives of people in a way that engages, inspires, and builds community by providing high quality exhibits and art education programs that instill a lifelong love of the arts. RAM relies on the generosity of members and donors to support its exhibitions, education programs, and special events. A 60-plus-year-old, private, non-profit cultural arts institution housed in a National Historic 1929 building designed by Hearst Castle and AIA Gold Medal-winning architect Julia Morgan, the museum welcomes over 50,000 visitors a year. The museum is open Tuesday – Saturday, 10:00 a.m. – 4:00 p.m. and Sunday, 12:00 noon – 4:00 p.m. For information on exhibits, events, classes, memberships, or sponsorship opportunities, visitwww.RiversideArtMuseum.org. Find us on Facebook (www.facebook.com/riversideartmuseum), Twitter (RAMRiverside), Instagram (@riversideartmuseum), and Pinterest (www.pinterest.com/ramarts).