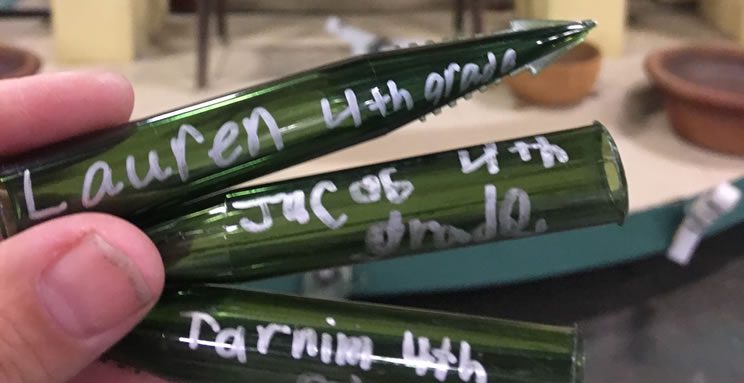 RIVERSIDE, Calif. – Riverside’s 2018 Rose Parade® float will come alive this weekend in preparation for judging on Sunday and for Monday’s iconic parade, as volunteers attach thousands of bright flowers to create a replica of the historic Mission Inn Hotel & Spa to honor “Keepers of the Inn” Duane and Kelly Roberts.

Many of those flowers will be attached to the float using small, green, plastic holders filled with water and carrying messages of love and thanks from Riverside residents and school children. The messages are designed to remember friends, family members and mentors who – in keeping with the 2018 parade’s theme of “Making A Difference” – have made a positive impact across the city.

Employees of the City of Riverside volunteered their time to collect flower holders during the first four weeks of the Festival of Lights in downtown Riverside and by working with principals and school officials at the Riverside and Alvord unified school districts. About 12,000 flower holders have been delivered to float builder Fiesta Floats of Irwindale.

“This effort to engage the Riverside community and help them become a part of this historic event, especially people who are not able to go to Pasadena for the Rose Parade, is part of what makes Riverside such a special place,” Mayor Rusty Bailey said. “It’s gratifying to be part of an organization that makes that extra effort on behalf of its residents.”

More than 15 area schools participated in the effort, collecting flower holders from both school districts. Students learned about the history of Riverside’s Rose Parade floats and the path their flower holder will take in the days prior to the parade. Beverly Stansbury of Fiesta Floats said she was not aware of another instance in which dedications from area schools have been included on a city float.

School children enjoyed penning the messages, including everything from signing their names to writing a note to a loved one. Teachers and administrators coordinated with City of Riverside workers to ensure the flower holders were collected and transported to the float-building facility in Irwindale.

“Thank you so much for letting the students of Mt. View participate in this historic event,” said Kathleen Doubravsky, the school’s principal.

Flower holders were collected at a booth during the Festival of Lights, starting the night of the Switch-On Ceremony at the Mission Inn Hotel & Spa. Many of the people who wrote an inspirational message chose to make a $5 donation to help defray float costs, since no public money is being used on Riverside’s float. No donation was collected at the school sites.

“This effort raised several thousand dollars in donations to help pay for the float, but it also raised awareness and gave people a chance to feel involved,” Mayor Pro Tem Jim Perry said. “I commend our employees, as well as the teachers and administrators at both RUSD and AUSD, for making the extra effort on this.”

About the Pasadena Tournament of Roses®

The Tournament of Roses is a volunteer organization that hosts America’s New Year Celebration® with the Rose Parade® presented by Honda, the Rose Bowl Game® presented by Northwestern Mutual and a variety of accompanying events. 935 volunteer members of the association will drive the success of 129th Rose Parade themed “Making A Difference,” on Monday, January 1, 2018, followed by the College Football Playoff Semifinal at the 104th Rose Bowl Game.  For more information, visit www.tournamentofroses.com. Like us on Facebook and follow us on Twitter, Instagram and YouTube.