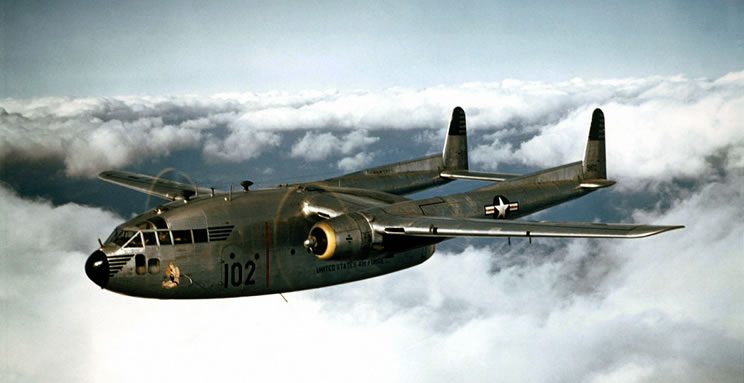 Riverside, Ca. – March Field Air Museum is proud to announce the sixth installment of  “Up-Close Aircraft Days” on Saturday, June 19, 2018, from 11 a.m. to 3 p.m. As part of this new interpretive program, a different aircraft is featured each month with the next focused on the Fairchild C-119 “Flying Boxcar.” On the second Saturday of each month throughout the year, Museum guests will have the opportunity for a close-up look – sometimes climbing stairs to get a close-up view into the cargo bay or cockpit, other times even climbing aboard.

For the upcoming “Up-Close Aircraft Day” focused on the C-119 Flying Boxcar, guests will see how this unusual, twin-boom aircraft—designed to carry cargo, personnel, litter, patients, and mechanized equipment—served on many missions and in numerous conflicts during its years of service. On this day, visitors to March Field Air Museum will get an up-close view of the Museum’s Flying Boxcar, peering into the cargo bay and also looking into the cockpit at close range.

A redesign of an earlier cargo aircraft, the C-119 was able to address numerous design deficiencies and at the same time, increase cargo capacity while allowing for larger loads. Variations of this aircraft were outfitted as gunships, and others assisted with the recovery of spy satellite film capsules. Serving through numerous conflicts and missions in Asia, Europe, the Pacific and the Far East, the last “Flying Boxcar” retired from active U.S. military service in 1974.

C-119s were provided to other nations under the Military Assistance Program, and the design was used by the Royal Canadian Air Force as well as other branches of the U.S. military, including the U.S. Navy and the U.S. Marine Corps. A number of C-119s were subsequently acquired by contractors to the U.S. Forest Service (USFS) and the Bureau of Land Management (BLM), and used as air tankers for fighting wildfires (the Museum’s C-119 served out its final years in Montana as an aerial tanker for firefighting). Others were used for civilian cargo service, and for hauling materials to areas with no road access (such as those found in parts of Alaska).

To preview the next “Up Close Aircraft Day” happening in July, a recently refurbished FB-111A Aardvark medium-range bomber will be featured. The Museum’s website features extensive information on each aircraft in its collection of more than 80 total, for those wishing to learn more.  Knowledgeable museum docents, dressed in period uniforms whenever possible, will be on hand to assist visitors, provide information and answer questions. The March Field Air Museum website will list upcoming “Up-Close Aircraft Days” and the featured aircraft each month; for more information, visit www.MarchField.org/calendar.