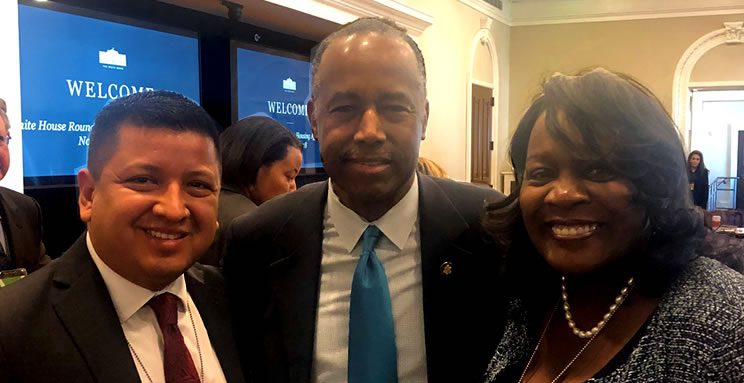 “We were honored to be invited to the White House Roundtable on Housing Affordability and represent Fontana at the highest level,” states Mayor Acquanetta Warren. “Fontana has a seat at the table and we are working to bring more affordable housing options to the residents of this great community.”

The purpose of the housing roundtable was to gather input from local government leaders working on the frontlines and discuss the unique challenges that municipalities are facing. Housing and Urban Development Secretary Ben Carson, as well as other key officials, spoke during the event.

Mayor Warren and Councilmember Armendarez joined 38 mayors, county commissioners and associations from across the nation to share ideas and develop strategies. According to a series of Tweets shared by Housing and Urban Development Secretary Ben Carson, the group will be working together to produce more affordable housing options and ease the pressure that’s forcing many into shelters and from living on the streets. Another item discussed was bringing fairness to fair housing and energizing a national effort to meet affordable housing challenges to ensure cities and communities are accessible to the families that they serve.

The meeting was organized by the White House Office of Intergovernmental Affairs which serves as the primary liaison between the White House and state, county, local, and tribal governments.