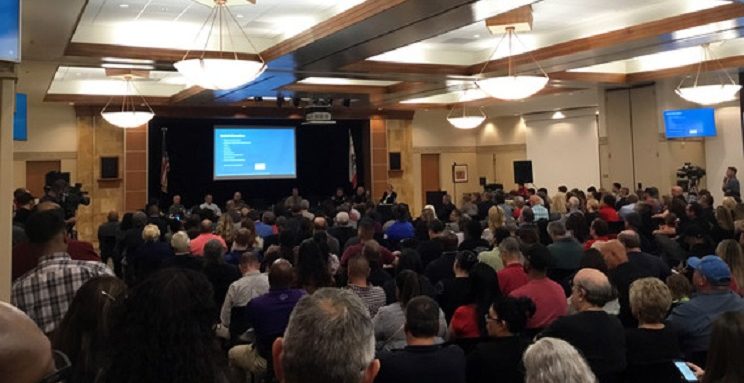 Fontana, Ca – The November 13 Public Safety Power Shutoff Community meeting is now available to view online. The meeting, in partnership with the Fontana Chamber of Commerce and Southern California Edison (SCE) was held to discuss the process behind the shutoffs, answer questions and concerns, and begin to advocate against the shutoffs becoming the new normal for Fontana.

Since the community meeting, the City of Fontana and Southern California Edison have been working to answer all of the questions submitted. Residents should expect to find the answers to the questions posted on the Fontana Emergency Management webpage by the week of November 25.

Below are the questions addressed to public safety representatives and City staff via the index cards submitted at the meeting:

How does the City of Fontana ensure signals do not go dark when electricity is turned off?The City can ensure traffic signal operations during an SCE power outage until the battery back-up resources are depleted. Once this occurs, the dark signalized intersection shall be treated as an all-way stop condition.Each signalized intersection is equipped with a battery back-up system that keeps the traffic signal operational until the lives of the batteries are depleted. In normal red, yellow, and green signal operations, the intersection will function for approximately 6-8 hours depending on the charged state of the batteries.For an extended SCE outage, the intersection is typically placed in all way red flash which will extend the life of the batteries to approximately 12-14 hours due to less battery power consumption. Once the batteries are depleted, the intersection will then go dark until SCE power is restored.The City does not install stop signs at a dark intersection unless someone can be onsite to monitor the condition and placement of the signs. With the heavy winds the City sustains during these outages, the stop signs will not stay in place and can, therefore, cause a more hazardous condition. Also, resources are limited which prevents the City from providing stop signs at multiple locations at one time. As Chief Green mentioned during the meeting, a non-operational/dark signalized intersection is to be treated as a 4- way stop sign and motorists should proceed with caution.The City keeps the signalized intersections operational without SCE power present as long as resources will last, but eventually those resources become exhausted.

If you missed the meeting, click here for the video.