Fontana Native Cleaning Up Her City One Neighborhood at a Time 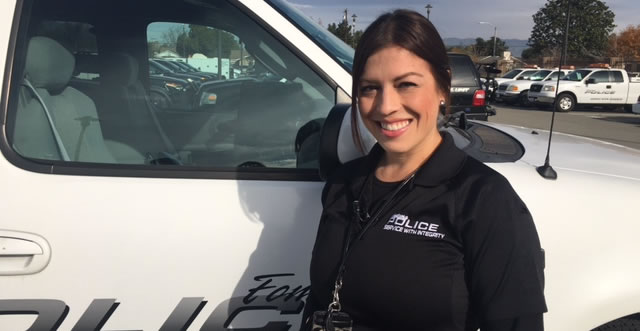 Fontana, Calif. – If you’ve received a notification from the city to clean up your property, there’s a good chance that Sandra Pelayo has handled your case. The Code Compliance Inspector has worked for the City of Fontana for 14 years and typically carries a workload of approximately 50 open and active cases. She takes pride in making a difference in her city by cleaning it up one neighborhood at a time. Sandra investigates code violation complaints submitted by residents- some as small as property owners leaving their trash cans out on the street to complaints of people converting their garage into unsafe dwellings. No matter how big or small the complaint she treats every resident with kindness and respect.

The Fontana High School graduate has moved up within the organization based on hard work and dedication. Her responsibilities include following up and investigating complaints submitted by residents. She always contacts the property owner, provides them with a notice and gives them time to comply. “I’ve dealt with a variety of people and I always put myself in their shoes and realize we are not all in the same financial situation,” said Code Compliance Inspector Sandra Pelayo. “So I work with them as much as possible to give them time to correct the property code violations.”

Sandra belongs to a 10 person Code Compliance Unit that is housed inside the Fontana Police Department. Their job is to enforce the city’s municipal codes. The unit is considered relatively small for a city with a population of approximately 207,000- based on latest U.S. Census figures and works based on complaints submitted by residents. They don’t have a large enough staff to proactively look for violations. “A lot of times residents may think they are being harassed or picked on by the city, but that’s not the case- we work based on the complaints submitted by residents,” assured Pelayo. She acknowledges that her team tends to deal with residents that are not happy with being told to clean up their property. Her team is committed to working with residents to bring them into compliance. “I like working with property owners to clean up their neighborhood. It makes me feel good that I not only helped out the resident but the community as well.”

Sandra’s been a single mother since her daughter was three months old. She has made it her life’s goal to always set the best example for her now 17-year-old daughter. Since joining the City of Fontana she has earned a Bachelor of Public Administration degree from California Baptist University and recently completed a Master’s degree in Management from the University of Redlands. She became employed by the city after working as a substitute employee for the Fontana Unified School District. “It took me a while to get hired on, but it was well worth the wait and I’ve been happy working for the City of Fontana for the last 14 years, added Pelayo.

Sandra recently fulfilled a lifelong dream by taking a 22 day trip throughout Europe to celebrate the completion of her Master’s program. Even more impressive is that the trip that included four flights, a 12-day cruise and lodging cost her approximately $2,000, not including food and souvenirs. “Traveling on a budget is possible, but planning ahead and choosing to go during the off season is key,” advised Pelayo.

Sandra has been selected as the City of Fontana Employee Spotlight for the month of December based on nominations from her peers. She expressed appreciation for the recognition and plans to continue making a difference in her community. “I’m never going to leave Fontana,” said Pelayo. “It will always be a piece of me.”