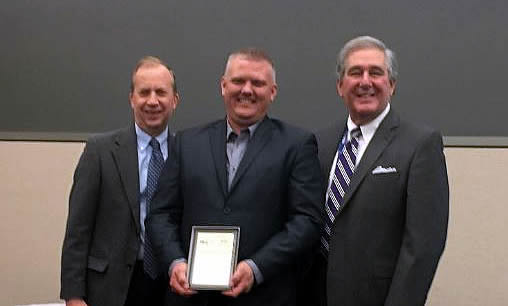 Fontana, Ca. – The National League of Cities recently recognized the City of Fontana along with more than 30 other cities for their efforts to improve nutrition and increase physical activity in their communities during the National League of Cities’ City Summit in Pittsburg on November 17, 2016. The City of Fontana was recognized for their Healthy Fontana Program and its work to enhance the goals of the Let’s Move! Cities, Towns and Counties Campaign. See goals. City of Fontana Community Services Manager Michael Wright and Mayor Acquanetta Warren attended the event and picked up the award on behalf of the dedicated city staff that is working to ensure the health and well-being of young people today and that of future generations.

Healthy Fontana is a community-based, award-winning program that promotes a healthy lifestyle, teaches smart nutrition choices and assists in creating an active, livable community to improve the quality of life for Fontana residents. Community Services Manager Michael Wright praised his team for the recognition.“This honor is only possible through great leadership, the vision from our Mayor and City Council, great management team and dedicated employees that have the community of Fontana in their best interest,” said Community Services Manager Michael Wright. ” The Fontana team has a passion for making residents lives better, and creating and implementing programs that eradicate obesity rates of children is just one way we develop healthier lives and a Healthy Fontana.”

The Healthy Fontana program was developed in response to First Lady Michelle Obama’s Let’s Move! Initiative encouraging communities to design programs to reverse the childhood obesity epidemic within a generation. More than 500 cities, towns and counties participate in Let’s Move! Cities, Town and Counties. Other California cities that were recognized for their efforts included Glendale, Rialto, Riverside and San Pablo. Medals were awarded to communities based on their achievements in improving access to healthy, affordable food and promoting physical activity.

Thirty-two communities received recognition at the ceremony which included four from California: