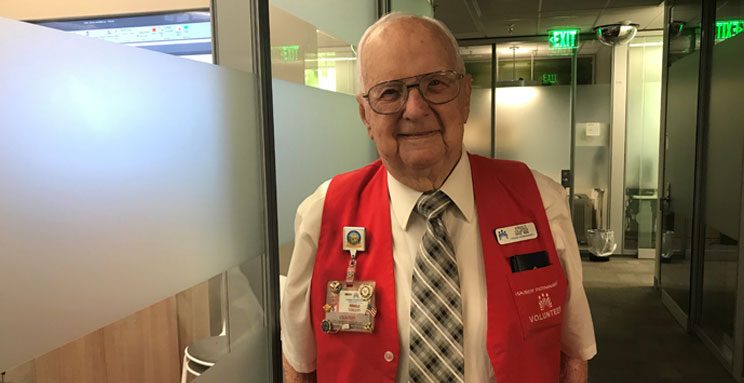 Oldest volunteer is set to retire at 95 years old, with 24 years of volunteerism

Arnold Tordoff was born on July 19, 1923 in Sanford, Maine, to Harold and Annie. When he was eight years old, Arnold’s family moved to Fontana, California, where his father found work as a tool crib operator at Kaiser Steel.

When he turned 18 years old, in July 1941, Arnold enlisted in the United States Navy. After attending Bootcamp at San Diego Naval Base, he was stationed out of Washington where he was an electrician’s mate, 3rd class (EM3). As an EM3, Arnold helped repair sound tower telephones on aircraft carriers that transported planes to different harbors.

On Friday, December 5, 1941, Arnold was one of the crewmembers aboard the USS Lexington, which had just left Pearl Harbor, to take planes to the Midway Islands. While in route to Midway, the crew heard of the attack on Pearl Harbor, and the subsequent declaration of war.

When Arnold returned to Fontana, he began his second career working in the Kaiser Steel Fire Department as a fireman. Arnold worked at Fontana Steel for 44 years and then California Steel Industries Fire Department for 7 years. After he underwent a quadruple bi-pass, he decided it was time to retire.

“I stayed home, taking care of the house, for about two years and then my wife retired,” he says. “One day, we went to Fontana Medical Center for a doctors for an appointment. I saw the volunteers working and thought, ‘I could do that!’”

Arnold has been volunteering at Kaiser Permanente Fontana Medical Center for more than 24 years, with over 11,000 hours to his credit. “Volunteering has been the best thing to happen to me,” he attests.

On days that Arnold volunteers, in the Neurosurgery and Anesthesia Interventional Pain Clinic, he arrives before everyone else. He makes coffee, prepares gurneys for the day’s patients, and eats his breakfast, while he waits for ‘his kids.’ Arnold says, “I call everyone that I work with ‘my kids.’ They treat me like I’m God! They go overboard; I don’t feel that I deserve it.”

On April 30, 2019, three months shy of his 96th birthday, Arnold will be retiring from his third career as a Kaiser Permanente volunteer. Arnold says that he is looking forward to spending more time with Doris, his wife of 64 years, and their two terrier dogs. While Arnold will be hanging up his volunteer hat, he promises to visit ‘his kids’ whenever he can.

Kaiser Permanente is committed to helping shape the future of health care. We are recognized as one of America’s leading health care providers and not-for-profit health plans. Founded in 1945, Kaiser Permanente has a mission to provide high-quality, affordable health care services and to improve the health of our members and the communities we serve. Kaiser Permanente’s San Bernardino County  Service Area has provided comprehensive, affordable health care to the Inland Empire for 75 years and serves over 611,000 members. The San Bernardino County Service Area includes the Kaiser Foundation Hospitals in Fontana and Ontario, and medical offices in Fontana, Ontario, Chino, Claremont, Colton, Hesperia, Montclair, Rancho Cucamonga, Redlands, San Bernardino, Victorville, and Upland.