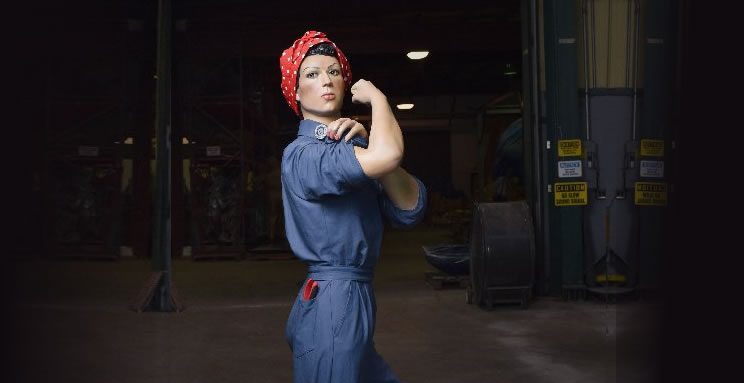 Riverside, Ca. – On Saturday, June 9, 2018 at 11 a.m., the March Field Air Museum in Riverside will proudly dedicate its new “Rosie the Riveter Memorial Rose Garden” in the museum’s outdoor Heritage Courtyard. On hand for the dedication as a special guest will be 98-year-old Elinor Otto, an actual World War II Rosie the Riveter aircraft factory worker. The dedication will include the unveiling of a full-size sculpture of Rosie the Riveter by artist Seward Johnson (one of only two nationwide, it will remain on view temporarily) alongside the recently planted garden of Rosie the Riveter hybrid Floribunda roses. Following the dedication ceremonies, an informal Q&A session will take place inside the museum at 12 p.m. with Ms. Otto, who encourages young women to live lives of independence, achievement and compassion. Rosie the Riveter is a cultural icon of World War II, representing the women who worked in factories and shipyards during the war. These women sometimes took entirely new jobs replacing the male workers who joined the military. Although most women took on male dominated trades during World War II, they were expected to return to their everyday housework once men returned from the war. More than six million women got war jobs, many of them producing munitions and war supplies. African American, Hispanic, white, and Asian women worked side by side, motivated by colorful posters and popular slogans like “We Can Do It!”

In an effort to ensure the contributions of “Rosies” are fully acknowledged, “Keeping the Spirit of ‘45 Alive,” a national collaborative, is leading the campaign to create a living memorial in the form of a U.S. network of Rosie the Riveter Memorial Rose Gardens. Some 60 gardens in 16 states are currently under development, with the Rosie the Riveter Memorial Rose Garden at the March Field Air Museum becoming one of the newest. These inaugural gardens form the initial backbone of an expanding national network of gardens; the Spirit of ’45 collaborative has established a goal of locating at least one in each Congressional District in time for the 75th anniversary of the end of WWII, in 2020. Featuring a new, official Rosie the Riveter rose varietal, the garden at March Field Air Museum is a proud part of this national memorial.

Elinor Otto’s story is a fascinating one. Elinor Marie Otto began her career as one of the original “Rosie the Riveters” in 1942, building airplanes at Rohr Aircraft Corporation in Chula Vista, California, during World War II. A single mom with an infant son, she earned 65 cents an hour. More than 70 years later, at age 95, Elinor put down her rivet gun for the last time in November 2014. She never retired, but rather was laid off when the Boeing Company began the process of closing its Long Beach, California, manufacturing plant where she had been building the C-17 transport plane. Elinor Otto remains active today, promoting awareness of the role women played during WWII and showcasing how the legacy of “Rosies” helped lay the foundations for expanding opportunities for women in America.

Regularly open Tuesday through Sunday from 10 a.m. to 5 p.m., March Field Air Museum strives to promote an understanding of humanity’s reach for the skies, and historic March Field’s pioneering role in the development of flight. Engaging exhibits and knowledgeable docents bring the subject to life, with thousands of artifacts and nearly 80 historic aircraft on display ranging from a replica of the 1903 Wright Flyer (which launched powered flight worldwide), to early examples of military aircraft and some of America’s most iconic military planes (including World War II bombers), to the world’s fastest air-breathing manned aircraft (the SR-71 Blackbird) and a modern-day MQ-1 Predator (remotely piloted aircraft). Throughout 2018, March Field (today’s March Air Reserve Base) is celebrating 100 years of service.

Both admission and parking for the outdoor Rose Garden Dedication on June 9 are free. Regular museum admission applies to participate in the special Q&A session with Ms. Otto, starting at 12 p.m. in the museum. This same day, the museum’s “Up Close Aircraft Day” takes place from 11 a.m. to 3 p.m., featuring the C-119 Flying Boxcar cargo aircraft. The March Field Air Museum is located alongside Interstate Highway 215 at Van Buren Boulevard, just south of downtown Riverside and adjacent to March Air Reserve Base. For more information about the Museum, call 951-902-5949 or visit www.marchfield.org. To learn more about the Keeping the Spirit of ’45 Alive campaign to create a nationwide living memorial to “Rosies,” visit www.spiritof45.org.

March Field (today’s March Air Reserve Base, located immediately adjacent to the museum) is the West Coast’s oldest continuously operating military airfield. Established in 1918 as the U.S. was embroiled in World War I, it began life as part of the U.S. Army Signal Corps. Following several sleepy years in the 1920s, March Field was expanded in the 1930s as the world again prepared for war. As March Field passed the quarter-century mark, it was busily training U.S. Army Air Forces personnel for deployment to all Combat Theaters during WWII. Following the war—as the Cold War began—and then continuing for nearly 50 years, March Air Force Base became the U.S. Air Force Strategic Air Command 15th Air Force headquarters and home to a massive nuclear deterrent force. In 1993, as March Field celebrated its 75th anniversary, it was selected for realignment and subsequently re-designated March Air Reserve Base. Today March Field is home to the Air Force Reserve Command’s 4th Air Force Headquarters and 452nd Air Mobility Wing, the largest air mobility wing of the 4th Air Force. In addition to multiple units of the Air Force Reserve Command, March ARB is also home to units from the U.S. Air Force, Army Reserve, Navy Reserve, Marine Corps Reserve, California Air National Guard, California Army National Guard and the Department of Homeland Security. As it begins its second century as a military airfield, March Air Reserve Base commemorates its role in serving as a birthplace of the modern Air Force, and is expanding to encompass new missions in protection of our great nation.