“The Lost Vegas Series” at University of Redlands Theater 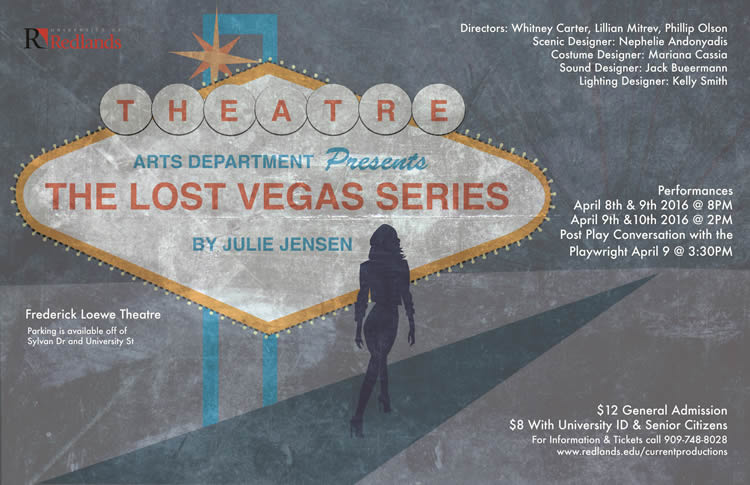 The University of Redlands Theatre Arts Department will present The Lost Vegas Series by Julie Jensen.

The show performs one weekend in April 2016.

TICKETS: Tickets for the event are available at www.redlands.edu/currentproductions or by calling (909)748/8028. $12* general admission, $ 8* with university ID, $ 8* senior citizens, *Credit card fee applied at time of sale

The Lost Vegas Series are an interwoven series of six short, comic, edgy plays, about a young woman living and working in Las Vegas, an everywoman character known simply as “Our Girl.” We visit the Liberace Museum, a quickie wedding chapel, and the highways and supermarkets that surround America’s fun palace. Plays include: How Not to Get F***ed, The Greatest Love, We Kirk o’the Heather, the Liberace Museum, Away in a Manger, and Lion Tongue.

Playwright Julie Jensen is the recipient of the Kennedy Center Award for New American Plays (White Money), the Joseph Jefferson Award for Best New Work (The Lost Vegas Series), the LA Weekly Award for Best New Play (Two-Headed) and the McKnight National Playwriting Fellowship (Wait!). Her plays have been performed in London and at the Edinburgh Fringe Festival (Last Lists of My Mad Mother). In the U.S., she has been produced by the Women’s Project in New York as well as in theatres nationwide. Ms. Jensen is the Resident Playwright for the Salt Lake Acting Company.

Immediately following the opening night performance, the audience is invited to join the cast and creative team for a reception with the playwright.

On April 9th, at 3:30 pm, following the matinee performance, Julie Jensen will join the cast for a post-play discussion, and Q&A with the audience.

Learn more about the Arts at the University of Redlands at www.theartsatredlands.com