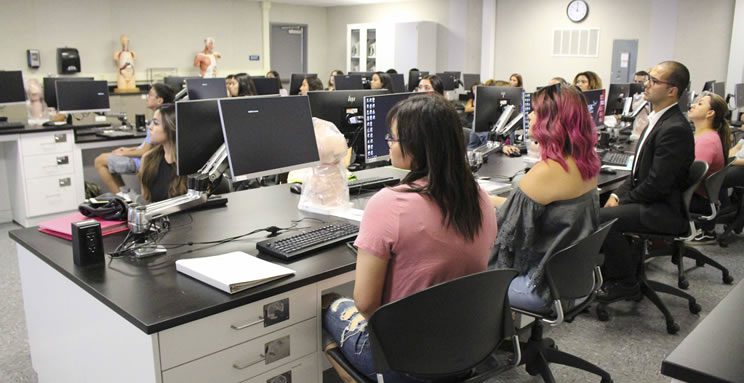 Above: Mt. San Jacinto College students attend the first day of the fall 2018 semester in the new Science Village @ MVC. The new series of classrooms was funded by Measure AA and offers more classes, like chemistry and anatomy, that students need to complete their education at MSJC.

Thanks to Measure AA, the $295 million facilities bond passed by voters in 2014, students enjoyed several new features and improvements at MSJC.

At the Menifee Valley Campus, improvements include new study areas and the new Science Village @ MVC. Moani Ceseña of Menifee is a second year student who plans on attending the nursing program. She took Anatomy 101 during the summer in the science village. She is now taking Anatomy 102 in the village.

“I really like … (the classes).  I like how spacious it is,”  Ceseña said.  “In Anatomy 101, I worked with microscopes and computers and everything was really nice and new.”

Emily Norris, a returning student who also plans on applying to the nursing program and is taking Anatomy 102, said she liked the new village and the equipment.

“There’s a computer at each desk,” she said. “They also added new lockers (for certain lab classes) and quality-wise, everything …(looks) good.”

As of the first day of fall 2018, a total of 15,467 students headed to one of MSJC’s five locations. That number is expected to peak at about 17,000. MSJC has locations in  San Jacinto, Menifee, San Gorgonio Pass and Temecula.

At the San Jacinto Campus, Measure AA funds were used to renovate and improve bathrooms, the athletics facilities, the MSJC Art Gallery and the student dining area. There are also new indoor and outdoor student seating areas.

Psychology 102 and a computer class were new this fall on the San Gorgonio Pass Campus.

“We continue to offer a broad range of courses at the San Gorgonio Pass Campus to help students meet their educational goals,” said Dr. Carlos Tovares, dean of Academic Programs. “Our math and English courses are very well enrolled, providing students the ability to meet these important requirements for graduation. The Spanish 101 continues to be a favorite of students.”

Blanca Richards, 42, of Temecula recently began taking classes at MSJC after moving from Oceanside. Richards, a full-time student, says she did not know any English while her children were young, but she took English as a second language classes at another college to improve her English. She plans to transfer to a four-year university when she is done at MSJC.

“I want be an example for them and let them know that everything is possible,” Richards said.

Richards’ son also attends MSJC through the Dual Enrollment program, which allows high school students to take college classes. She said she looks forward to the opening of the new Temecula building that MSJC purchased earlier this year at Ynez Road and Motor Car Parkway so her son can attend the new facility.

“This semester I was able to get all the classes I needed. I met with my counselor and we made a plan for the two years that I’d be here,” said Nampi.