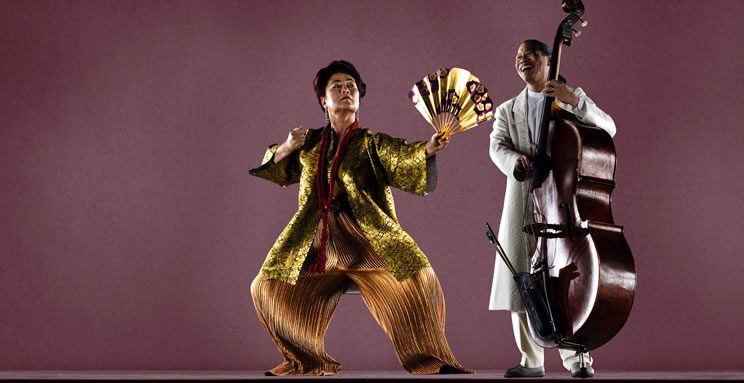 The workshop and performance are part of the artists-in-residency project inspired by Wendy Maruyama: E.O. 9066, an exhibition running through May 27 that explores the impact President Roosevelt’s Executive Order 9066 had on the artist’s family and Japanese Americans. The artwork incorporates objects and imagery that depict the realities of the imprisonment of approximately 120,000 Americans of Japanese ancestry and resident aliens from Japan during WWII. Information and artifacts about Harada House and Mine Okubo are also included in this exhibition.

The artists-in-residency project, made possible with support from the California Civil Liberties Public Education Program at the California State Library, kicked off on Saturday, February 17, during RAM’s Day of Remembrance Free Weekend, with Tales of Resilience. Visitors to the museum, including two survivors from the camps, listened to one-half of our artists-in-residency duo, Brenda Wong Aoki, discuss and perform true stories from the incarceration.

Brenda shared stories and photos of her and her husband’s families in the camps, ending with a moving performance of “The Train Ride”, a heartbreaking true story that was told to Brenda by a nurse who was forced to leave her home and all she and her husband owned to be incarcerated in camps during WWII. A baby who should have been in the hospital was placed on board a train to the camps with her mother. The nurse, aboard the same train, did all she could to help the mother and baby, but the end-result was out of her hands.

This workshop is an intergenerational workshop culminating in a roundtable sharing of personal stories and artifacts. Participants, please bring small precious objects that have sustained you during your life. Come prepared to explain how you got them and why they’ve helped you.

The purpose of this workshop is to gather personal stories. Stories about or that resonate with the Japanese American incarceration during WWII; stories of kismet and kindness that go beyond skin color.

Some of these stories may be used to add to the impact of Wendy Maruyama’s The Tag Project and the E.0. 9066 historical narrative in the culminating site-specific performance by Aoki and composer Mark Izu.

Swirling in silk, tugging at heart strings, sharing tales of courage and survival, Brenda Wong Aoki and master musician and composer Mark Izu will presentTales of Love & Resilience: A Site-Specific Performance, on Saturday, March 17, at 1 p.m.

Taking the community’s stories gathered during the Milagro, Talisman & Love Stories: Tales of Courage & Kindness in Hard Times workshop, RAM Artists-in-Residence Brenda Wong Aoki and Mark Izu will spread tales of love and resilience that can be used today.

Please also join us for the debut of The Tag Yourself Project on Thursday, March 1, 6 p.m. – 9 p.m. RAM invites visitors to reflect on civil liberties and stand with those who fight to protect them by creating a paper ID tag, reminiscent of the ones Japanese-Americans were required to wear when being forcibly relocated to incarceration camps during WWII, using small self-portraits taken with polaroid cameras. Participants can add their tag to a Solidarity Wall for the duration of the Wendy Maruyama: E.O. 9066 exhibition. Brenda Wong Aoki is trained in Noh and Kyogen, contemporary dance and voice. She continues to entrance audiences throughout the world with her intense, lyrical Japanese ghost legends and heart-warming personal stories. A playwright and performing artist, Brenda has been honored with Hollywood Dramalogue Awards, Critic Circle Awards, fellowships from the National Endowment for the Arts, commissions from U. S. Congress, the State of California, and the City of San Francisco. Her recordings have garnered Indie awards for Best Spoken Word. She is a founding faculty member of Stanford University’s Institute for Diversity in the Arts. Her grandfather was a founder of the nation’s first Japantown in 1897 in San Francisco. Brenda was raised in Long Beach and in the early 1970s played glockenspiel at football games in the Poly High School marching band. http://www.brendawongaoki.com/

Composer, producer and bandleader Mark Izu has fused the traditional music of Asia with African- American improvisation. Izu plays acoustic bass as well as several traditional Asian instruments such as the sheng (Chinese multi-reed instrument) and sho (Japanese multi-reed instrument). As the Artistic Director of the Asian American Jazz Festival for 15 years, Izu has gained national and international attention for developing a new musical genre, Asian American Jazz, and has performed with artists such as James Newton, Steve Lacy, Zakir Hussain, Kent Nagano, George Lewis, Cecil Taylor, Anthony Brown and Jon Jang. Recently Izu has been inducted into the Grove Dictionary of Music as a composer and founder of Asian American Jazz. Izu has composed scores for film, live music concerts and theater. In 2009 Izu won an Emmy® Award for Outstanding Music for his score in Bolinao 52. His film scores include Steven Okazaki’s Academy® award-winning Days of Waiting; Emmy-winning documentary, Return to the Valley; and a new score for the DVD release of Sessue Hayakawa’s 1909 masterpiece, The Dragon Painter (Milestones DVD – 2007). His theater scores have been performed at the Kennedy Center, Lincoln Center, and Sundance Festival and he was awarded a Drama-logue Award for Best Original Music & two Indie Awards for best CD. Izu’s other awards include Meet the Composer, Gerbode Composer Commission, Asian Business League Artist Award, Rockefeller MAP, National Endowment for the Arts, and San Francisco Arts Commission. Izu was a founding faculty member of Stanford’s Institute of Diversity for the Arts in 2002. In 2007, he received the US/Japan Creative Arts Fellowship to Japan sponsored by the National Endowment for the Arts and the Bunkacho.

To learn more about the residency,  visit: http://www.riversideartmuseum.org/events/specialevents/riverside-love-stories-artist-residence-project/

The Riverside Art Museum integrates art into the lives of people in a way that engages, inspires, and builds community by providing high quality exhibits and art education programs that instill a lifelong love of the arts. RAM relies on the generosity of members and donors to support its exhibitions, education programs, and special events. A 60-plus-year-old, non-profit cultural arts institution housed in a National Historic 1929 building designed by Hearst Castle and AIA Gold Medal-winning architect Julia Morgan, the museum welcomes over 50,000 visitors a year. The museum is open Tuesday – Saturday, 10:00 a.m. – 4:00 p.m. and Sunday, 12:00 noon – 4:00 p.m. For information on exhibits, events, classes, memberships, or sponsorship opportunities, visit www.RiversideArtMuseum.org. For information about the proposed Cheech Marin Center for Chicano Art, Culture & Industry at the Riverside Art Museum, visit www.riversideartmuseum.org/cheech. Find us on Facebook (www.facebook.com/riversideartmuseum), Twitter (RAMRiverside), Instagram (@riversideartmuseum), and Pinterest (www.pinterest.com/ramarts).