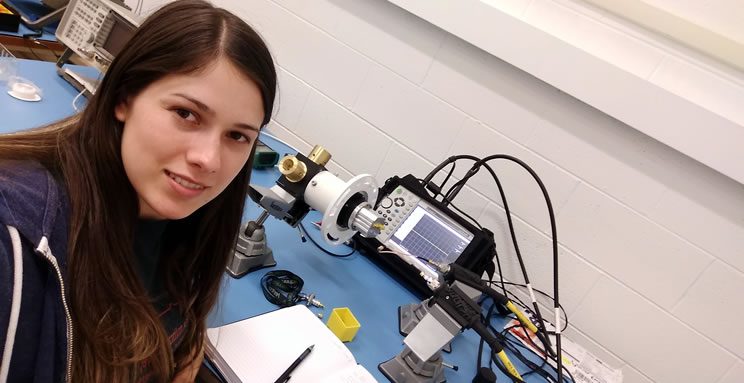 Riverside, CA – Take RCC student Sierra Garza for instance. Garza, a graduate of La Sierra High School who is majoring in Physics/Astrophysics, recently presented her research to two conferences this month: one at the American Astronomical Society conference in Washington, DC, and the other at the Conference for Undergraduate Women in Physics, hosted by the American Physics Society.

“Sierra impresses me with her divergent ability to draw on all of her knowledge to solve problems, not just the information given to her in a specific class,” Louise Daniels, physics and astronomy professor, said. “Perhaps even more impressive, however, is the fact that her lateral way of thinking is balanced with uncommonly grounded and practical reasoning. This is the perfect combination of attributes necessary for a position in scientific research, and I have no doubt she will do great things.”

Garza, who also participated in an intense NASA internship for community college students called the National Community College Aerospace Scholars program, spent last summer at the Massachusetts Institute of Technology as part of the CAMPARE program in Cosmology and Radio Astronomy. That program allowed her to participate in undergraduate research projects for 10 weeks with scientists from one of 14 world-class research institutions on projects spanning the fields of astronomy, planetary and space science, astrobiology, and astronomy education and public outreach. She was part of a team on the Hydrogen Epoch of Reionization Array (HERA) project, which is a state-of-the-art radio telescope being built in South Africa. The radio telescope is dedicated to observing large scale structures during and prior to the epoch of reionization.

At the January conferences, Garza, who was part of an eight-person team that designed a broadband low-frequency radio feed, shared her research. Titled the HERA Broadband Feed Design for Low-Frequency Radio Astronomy, Garza, and her team, hoped by extending the lower-limit to 50 MHz, they could detect signatures of the first black holes heating hydrogen gas in the intergalactic medium. Labeled the Hydrogen Epoch of Reionization Array (HERA) project, the group hailed from such universities as San Jose State; Dunlap Institute in Ontario, Canada; Massachusetts Institute of Technology; University of Virginia; and affiliated associations as National Radio Astronomy Observatory and National Radio Astronomy Observatory in Pasadena.

“The isolation of a very faint signal from vastly brighter foregrounds sets strict requirements on antenna spectral smoothness, polarization purity, forward gain, and internal reflections,” Garza said. “We are currently working to meet these requirements with a broadband sinuous antenna feed suspended over the 14-m parabolic HERA dish, using a combination of measurements and simulations to verify the performance of our design.

“A sinuous feed has been designed and simulated with Computer Simulation Technology (CST) software. We will present the construction of a prototype sinuous antenna and measurements of its reflection coefficient, S11, including laboratory characterization of baluns. Our measurements agree well with the CST simulations of the antenna’s performance, giving us confidence in our ability to model the feed and ensure that it meets the requirements of a 21cm cosmology measurement.”

Garza’s participation in such groundbreaking research is just one example of the work students in the Riverside Community College District get their hands on each year.

At Moreno Valley College, after being awarded a portion of a $1.5 million National Science Federation grant, the faculty developed a research-based course for biology major students in collaboration with the University of California, Riverside. Since developing the research-based course, eight biology and chemistry students have presented their research at the CCURI National Student Poster Conference and four faculty members have participated in research workshops organized by CCURI. As part of the course, students have been studying cliff swallows on the campus. Using camera trapping and ArcGIS, students each year map and record the life of swallows. The research gained MVC the first independent NSF funding for the initiation of the Flying with Swallow project. 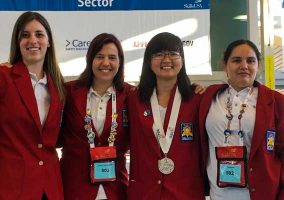