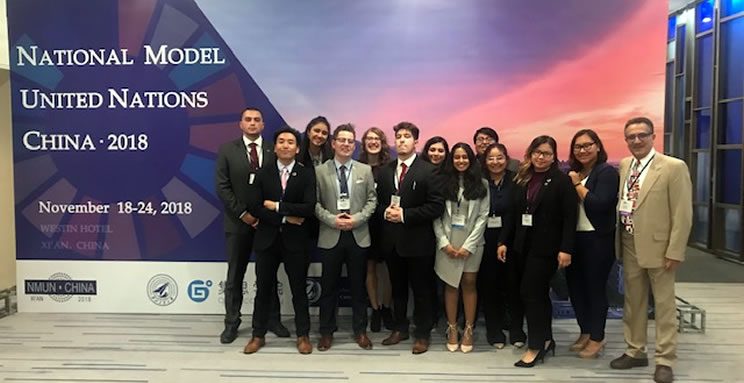 The conference hosted over 400 students from universities across the globe. RCCD, however, was the only community college in attendance. The team was one of the most diverse at the conference with four males and seven females (two Caucasian, a Sri Lanka-American, five Mexican-American, a Pilipino-American, an Indonesian-American and an Afghanian-American). Team members were: Skyler Ann Fisher (head delegate), Himadri Anuki Hewagodage Ratnayake, Caleb Ireston Ragan, Carlos Anthony Robledo, Jaidee Maximo Villaflor, Olmar Espinosa, Geby Christina Rawung, Dalia Liliana Rosas-Salazar, Luz Andrea Perez-Ponce, Ariana Carreon Siddiq and Cynthia Alexandra Roman.

Fisher and Villaflor were voted by their peers as the best delegates in their committee, while Fisher, Villaflor, Siddiq and Rosas-Salazar won the Outstanding Position Paper award. RCCD’s team was also recognized with the Outstanding Team Award. Model UN advisors are professors Dariush Haghighat, Ph.D., and Tomas Ocampo.

Competitors focused on pressing global issues while marveling at more than 2,000 years of Chinese civilization. Xi’an, which hosted the conference, is a modern city of eight million inhabitants that also embraces its history as an ancient capital at the start of the Silk Road. The conference hotel sat across the street from the Buddhist Big Wild Goose Pagoda, 7th Century-Tang Dynasty.

RCCD represented Equatorial Guinea, a country located in Central Africa, with an area of 11,000 square miles. Equatorial Guinea is the only sovereign African state in which Spanish is an official language and has become one of sub-Saharan Africa’s largest oil producers. It is the richest country per capita in Africa.

“What makes the RCCD Model United Nations incredible achievement even more impressive is the fact that RCCD was the only community college competing in the competition,” Haghighat said. “The team was also the youngest and most diverse group at the conference.”

“No words can possibly describe my sense of joy and pride for the impressive achievement of this very dedicated group of young and underrepresented students,” Haghighat said.

Next year’s fall event will be held in Germany. On February 5, the team will be competing in the MUN Conference in Spain and then on March 24 travel to New York for the annual conference at the United Nations. To become a member of the Model UN team, contact Haghighat or Ocampo on the Riverside City College campus or stop by Quad 215 on Friday between 1 and 4:30 pm.