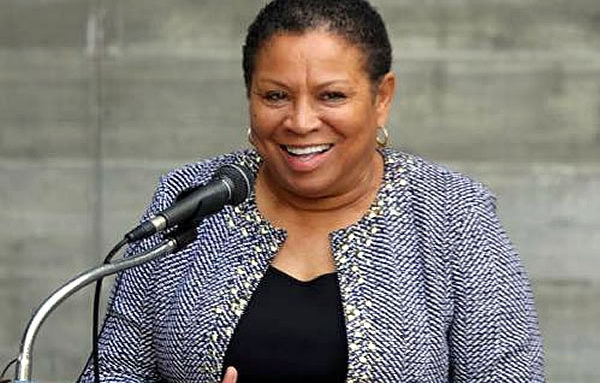 (Rialto, Calif.) As Deborah Robertson moves from table to table greeting folks at Mary Stewart’s Southern Soul Food, the Mayor of Rialto looks as comfortable as if she was in her own kitchen.

In a way, she is. Mayor Robertson has called Rialto home for nearly 30 years and has served in its local government for 16 years, including three terms as a councilwoman and one as Mayor.

As she campaigns for re-election – Election Day is Nov. 8 – Mayor Robertson’s reason for wanting a second term is simple. “I’m not done.”

“I feel the role of the Mayor is a calling, not just a title,” said Mayor Robertson, who is running against current councilmember Ed Palmer. “We keep it real in Rialto. Our foundation is in a common belief of community. We’re middle class, salt of the earth people.”

In her first term, Mayor Robertson accomplished much of what she wanted. Her focus was on keeping Rialto financially sound, moving forward on commercial and business development, generating jobs in Rialto and enhancing open space for healthy recreational usage.

“The community as a whole is concerned about safety and lowering crime in the city,” said Mayor Robertson. Cutting down on crime was also a major focus in her first term as Mayor.

“I am very proud of the part the city’s police force played in response to the terrorist attack nine months ago in San Bernardino,” said Mayor Robertson. Rialto’s SWAT Team was one of the first responders in support of San Bernardino’s units.

During her time as Mayor, Rialto was also one of the first cities to have its police force wear body cameras. “As the result of a research project, the Rialto police agreed to wear the cameras for one year,” said Mayor Robertson. The results were positive and Rialto decided to keep the cameras. Robertson said it gave citizens a new perspective into law enforcement.

“It gave us empirical data, not just anecdotal,” Mayor Robertson said. “The number of complaints from citizens went down drastically. It brought about a different level of respect for the police.”

Statistically, both violent crime and property crime have gone down in each year of Robertson’s first term as Mayor.

In 2014, Rialto dropped below the national average in violent crime rate for the first time in 12 years, according to City-Data.com. Mayor Robertson is also one of four Mayors in San Bernardino County that have been very vocal about the illegal gun problem.

For more information about Mayor Deborah Robertson go to: http://www.DeborahRobertson.org.

Deborah Robertson was elected Mayor of Rialto in November 2012 – the latest achievement in a distinguished public service career that has included 12 years on the Rialto City Council, leadership positions at the Southern California Association of Governments (SCAG), the San Bernardino Associated Governments (SANBAG), and more than 20 years with the California Department of Transportation.

Under Mayor Robertson’s leadership, Rialto has gained regional and national recognition for innovation in the areas of public-private partnerships, business development and job creation. The City’s refinancing and restructuring of its water and wastewater operations has become a model for other communities in California, pumping millions of dollars into the local economy.

A leading voice on regional and national infrastructure issues, Mayor Robertson chairs the Public Health Subcommittee for SCAG’s 2016 Regional Transportation Plan/Sustainable Communities Strategy, is a member of the U.S. Conference of Mayors Water Council and Metro Economies, and member of Mayors Against Illegal Guns.

She is a founding board member for the NFL/AFL Youth Life Skills Camp, has hosted the annual State of Women event in Rialto for the past seven years, and was recognized by Assembly Member Cheryl Brown as 47th District Woman of the Year.

Mayor Robertson retired from Caltrans in 2012, most recently serving as Deputy District Director of External Affairs. A native Californian, she holds an undergraduate degree in Urban Planning from the University of California, San Diego, a Masters Degree in Public Administration from the City University of New York Bernard Baruch College and is a National Urban Fellows recipient. She is also a scholarship recipient and past participant of the Southern California Leadership Network.

Mayor Robertson was instrumental in developing Rialto’s Transportation Commission and coordinated a transportation summit for the region. Her wielding influence and determination have helped bring new businesses and housing to the City of Rialto.

With all that she has done Mayor Robertson still has the time for family, two children and six grandchildren, that are the joy of her life. 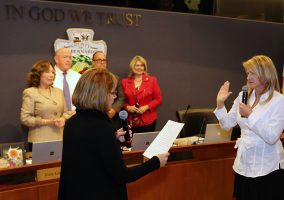