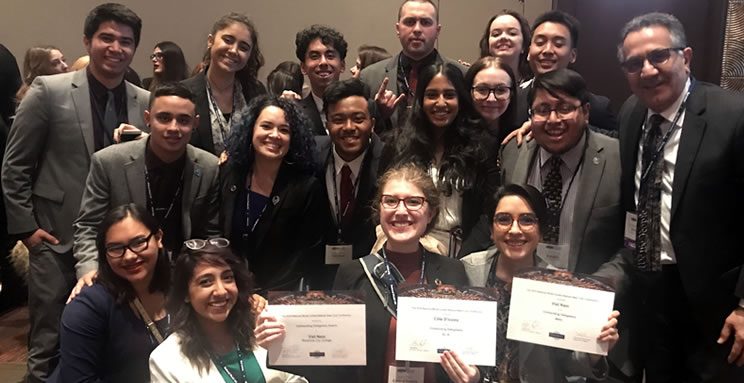 Riverside, CA – Last week was a busy week for Skyler Fisher and the rest of the Riverside Community College District Model United Nations (MUN) team which was among the highest scoring teams at the conference earning themselves the Outstanding Delegation Award.

Earlier in the week, Fisher experienced a once-in-a-lifetime experience when she was asked to speak in a special session of the 2019 NMUN conference held at the General Assembly of the United Nations in New York. Fisher and a few other speakers were given half a minute each to articulate their personal take on some of the most pressing global challenges the young generation is currently facing.

“In the week-long conference, not only Skyler was able to come up with a sound resolution in response to the international crisis submitted to her Security Council committee,” Dariush Haghighat, Ph.D., professor, Political Science and the RCCD Model UN advisor, said, “(but) she was also able to establish her commanding leadership in the committee and rallied the Security Council members in support of her resolution. Skyler formulated a truly impressive resolution, and masterfully and forcefully articulated her position.”

The competition concluded with the team being declared winner of the Outstanding Delegation Award at the closing ceremony. This was the seventh consecutive year that the RCCD MUN team scored such an impressive team victory at the Model United Nations Conference in New York.

Each year, some 5,000 college/university students convene on New York City to discuss current global issues. Delegates are tasked to solve pressing issues relevant to UN committees. The purpose of the conference is to advance the understanding of the UN and of contemporary international issues that have positively impacted the lives of numerous delegates.

Haghighat said that he was overwhelmed with joy and pride for this incredibly talented Model United Nations team. He was especially thankful for the incredible training and exemplary leadership of his co-advisor, Professor Tomas Ocampo, an RCCD MUN alumnus.

The New York competition concludes the 2018-19 season. The 2019-20 competitive season begins in November with a competition in Erfurt, Germany. Students interested in the Model UN can contact Haghighat or Ocampo on the Riverside City College campus.