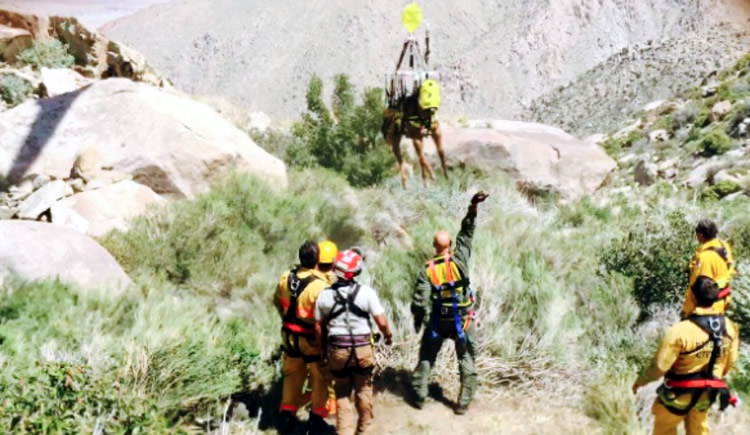 Spirit –  Passed away at approximately 11pm on Sunday evening. Spirit had been rescued by helicopter from the steep terrain and then transported to an Animal Hospital. He became septic due to an injury sustained during the accident, and his kidneys also began to fail. A veterinarian euthanized Spirit.

Mo –  Passed away on Sunday afternoon prior to rescue personnel attempting to airlift him from the canyon. Mo was euthanized by a veterinarian and laid to rest in the steep canyon terrain. A piece of his mane and tail were cut and delivered to the owners after his death by the veterinarian. This is custom after the passing of a horse.

Rescue personnel were informed of Spirits death on Monday.

On Sunday, April 3, 2016, The City of Riverside’s HART Team responded to Snow Creek just outside of Palm Springs for a Horse Rescue. The horses and owners were on a volunteer mission to deliver some equipment to clean up a hiking trail when 3 horses became stuck on the mountain and injured. Mo and Spirit had fallen down a steep cliff and were unable to access the riding trail.

Due to the steep terrain, Riverside County Sheriffs Helicopter Star 9 airlifted rescue personnel to the scene. Spirit was successfully airlifted to safety and was returned to his anxiously waiting owners. Mo unfortunately succumbed to his injuries prior to being airlifted. The third horse was able to free itself prior to rescue personnel arriving on scene.