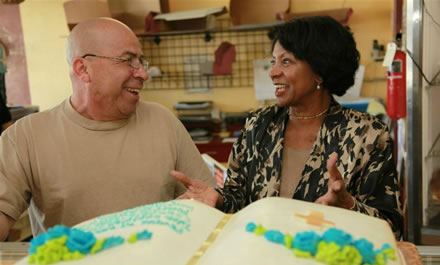 The owner of Noyes Bakery has a community spirit that runs deep and a passion for making delicious and creative cakes for life’s special occasions.

For those contributions and carrying on an 87-year-old tradition in San Bernardino, Noyes Bakery was selected 62nd Assembly District Small Business of the Year for 2011.

“David Ortiz and Noyes Bakery provide many resources and services that enhance the lives of customers, our students and our community organizations,” said Assembly Member Carter, who honored Ortiz and his bakery at a California Small Business Association luncheon on June 6 at the State Capitol . “Noyes still uses the original recipes so it’s part of the history of San Bernardino.”

From a yummy re-creation of a Louis Vuitton handbag for a Sweet 16 party to a frosted likeness of Michael Jordan’s shoes for a fan’s birthday celebration, Ortiz is eager to fill any custom request.  He also volunteers desserts for community functions and has made cakes gratis for customers whose occasions touch him personally.

“A couple, she is 94 and the gentlemen is 95. They came to us and asked for a small cake,” Ortiz said. “I said for what? When I heard a 65-year anniversary, I said this is not going to be simple. We did a beautiful, special cake, free of charge.”

The native Guatemalan left the real estate business to pursue his passion for baking cakes, cupcakes and pastries. He ran a Fontana bakery, then, three years ago, bought Noyes Bakery on West Highland Avenue from its second owner.  “I knew if I had a chance to do something different, I would always have wanted to do something like this,” said Noyes, who employs six assistants.

Noyes is a family business with Ortiz’s wife, Alda, and son, David, Jr., working by his side. In this economy, running a small business isn’t easy, he said. “I work extra hard. I’m here from 7 a.m., sometimes until midnight, six days a week. I love it every second. I do believe I can do something great.”