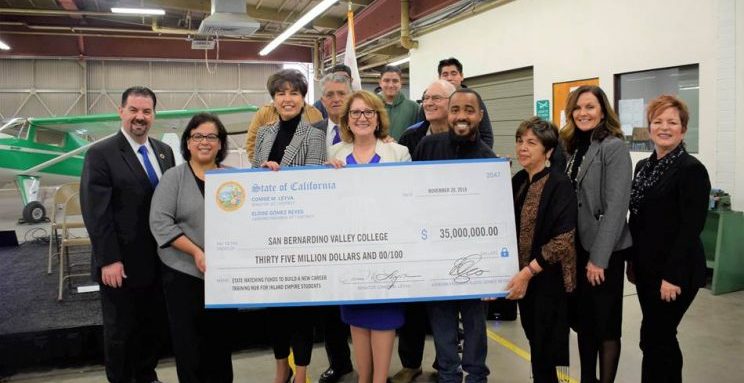 They came to celebrate the fact that this plain brick building — one of the oldest on the campus — is about to get a 21st-century overhaul to become a career training hub for Inland Empire students.

Gov. Gavin Newsom allocated the first $2.5 million for the new Applied Technology Building in his recently signed budget. The college will receive $35 million from state construction bonds passed by voters in 2016. The district will match that from Measure CC money voters approved locally in 2018.

Construction starts in summer 2021 on a 99,500 square foot building outfitted for modern workforce training. The new building will be accessible, sustainable, and filled with the tools needed for training students in water management, automotive repair, and machining, among other fields.

Currently, there are about 5,600 students enrolled in Career and Technical Education (CTE) courses on the campus.

“This is the fun part of the job,” said State Senator Connie M. Leyva, who commented on the enthusiasm among the faculty and students as she toured their programs. She worked closely with State Assemblymember Eloise Gómez Reyes to get San Bernardino Community College District listed among the districts receiving construction money from the state.

“When we work together, we win together,” Leyva said.

Gomez Reyes practiced law before she was elected in 2016 to represent the 47th Assembly District. “We fought to make sure that money came to San Bernardino Valley College,” she said. “We need livable wage jobs so students can enter the middle class.”

It was a tough fight and a close call, said Frank Reyes, a college district trustee and chair of the board’s legislative committee. He said it involved meeting with leaders in Sacramento and convincing them that the Inland Empire needed some of the Prop. 51 funding, passed by voters in 2016. At the suggestion of a staff member from Leyva’s office, the district delayed a groundbreaking for the new building. State construction money can only be allocated for a new project, not one already underway. The advice paid off.

Bill Rawlings, a member of the California Community College Board of Governors, said investing in the Inland region makes strategic sense. “How do we build good careers that people can use to lift themselves up?”

San Bernardino Valley College President Diana Z. Rodriguez earned the biggest ovation when she said that students deserve the kind of training that will make them the entrepreneurs and skilled workers who will drive the economy forward.

“We work day in and day out for our students,” she said.

Mauricio Jauregui likes the sound of that. At 22, he is just starting out his training in auto repair and attended the celebration with several other automotive students. He said even if he does not get to see the new building, he is happy to witness the launch of something that will be a resource for the students who come next.

“I like what they said about earning a livable wage on one salary,” he said. “So many of us struggle.” 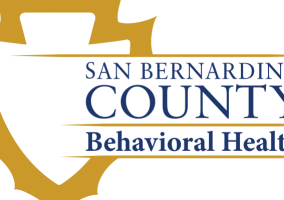 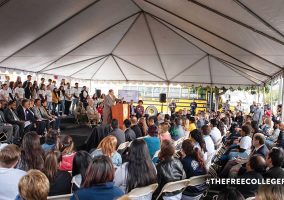 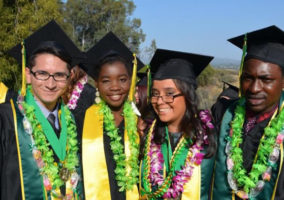 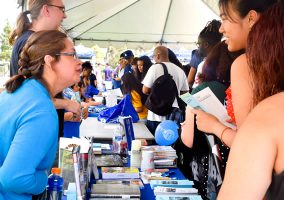 Coffee in Rialto – Learn About Going to College – Sept. 29th