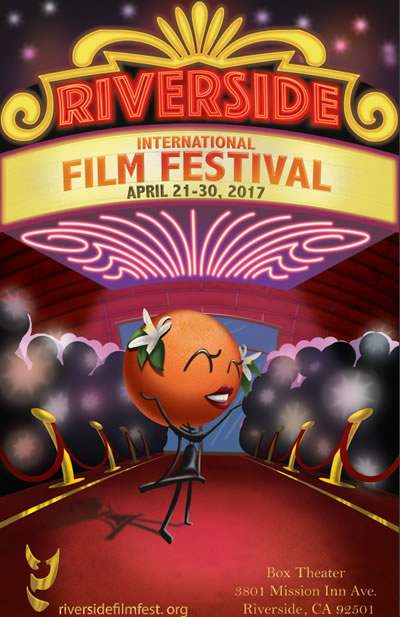 This year’s winner, Brittany Goff, is a graduate of Ramona High School and majoring in Fine and Applied Arts. A classmate, Heather Finnigan, received an honorable mention for her submission.

The Riverside International Film Festival, which is in its 15th year, runs 10 days and features independent cinemas, showcasing feature, short, documentary and animated films from Hollywood and the rest of the world. This year’s event runs from April 21-30 at venues throughout Riverside.

The poster competition is a yearly event and open to graphic design students throughout the region.

“The Raincross symbol and oranges are all over the city,” Goff said. “I wanted to combine those symbols and make a personification of the city out of them, something that can be used to welcome others.

“The City of Riverside is a very hospitable city, willing to welcome those from near and far.”

The competition has become a regular assignment in instructor Shawn McKelvey’s computer art class, and his students have dominated the competition.

“It’s pretty cool to be a part of a winning streak, and it was made possible by the wonderful teachers at RCC,” Goff said.