Redlands, CA – For the first time since the start of the century-old tradition, the University of Redlands has selected a female pup to be the University’s next live bulldog mascot. 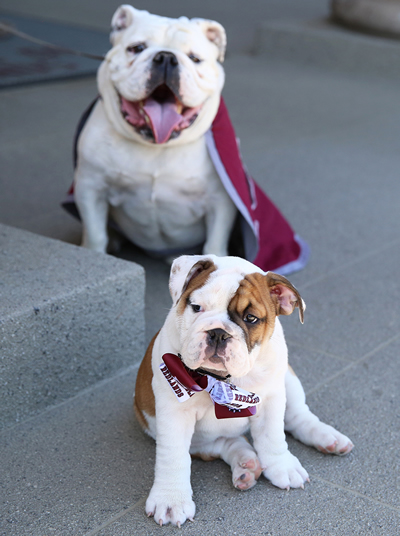 “In 1917, the University embraced the bulldog as the living embodiment of the strength, loyalty and tenacity that drive our success,” said Shelli Stockton, director of alumni and community relations. “Since that time, several special bulldogs have served as our official (and sometimes unofficial) canine ambassadors. In a new and welcome twist to the tradition, our yet-to-be-named female puppy is next in line for that role.”

The nine-week-old brown, white and black pooch will spend the coming academic year shadowing the current official mascot, seven-year-old Thurber, who has mastered the art of posing for “selfies” with members of the University community, wearing the school colors maroon and grey, and inspiring U of R fans and athletes in National Collegiate Athletic Association (NCAA) and Southern California Intercollegiate Athletic Conference (SCIAC) competitions.

At the end of the school year, the apprentice will assume full mascot duties and Thurber will become mascot emeritus.

The search for the new mascot took several months. “We needed a friendly, confident bulldog puppy who was in good health, comfortable with people, and good with other dogs,” said Mary Littlejohn, who is assistant director in Alumni and Community Relations and the mascot-in-training’s handler. “We reached out to our alumni community and many rescue organizations for help, and finally found the right dog with a lovely family in San Bernardino, who had raised this puppy in their home with their children.”

The name of the new mascot will be determined in a contest, with details still to be announced. However, suggestions are already flooding in—including those that riff off the University’s playful nonsensical chant, Och Tamale (Gazolly and Tamolly), reference the University’s 107-year-old history (Adelaide “Addy” for the wife of University founder Reverend Jasper Newton Field), and highlight the University’s scenic campus (Rosie and Orange Blossom).