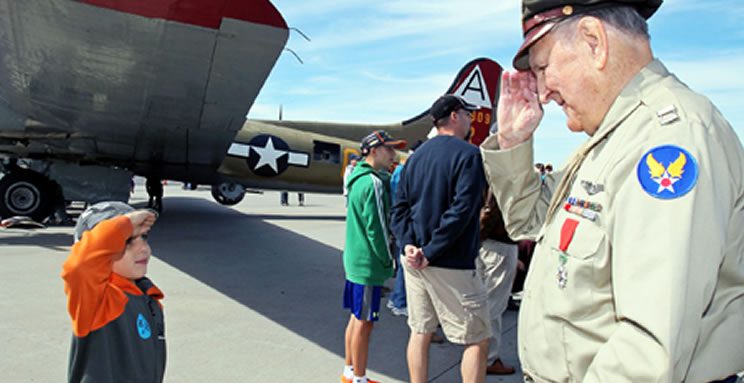 Riverside, Ca. – The WINGS OF FREEDOM TOUR, a collection of unique and historical aircraft from The Collings Foundation, will land Monday (4/30) at Riverside Municipal Airport, giving veterans, families and aviation enthusiasts the opportunity to visit, explore and learn about historical aviation. The event on the airport main ramp continues through May 3.

The World War II aircraft travels the United States as a tribute to the flight crew, ground crews and workers who built them, as well as the soldiers, sailors and airmen they protected. The planes also celebrate the freedom they helped preserve while helping Americans learn about their heritage.

“This event is very important to the City to honor our veterans,” said Kim Ellis, Airport Manager. “The aircraft that will be on display helped win WWII, and many of our residents are veterans of that war.  We are honored to host the Collings Foundation.”

Famous for their ability to sustain damage and still accomplish the mission, the aircraft that are a part of the WINGS OF FREEDOM TOUR include the WWII Vintage Boeing B-17 Flying Fortress “Nine O Nine,” Consolidated B-24 Liberator “Witchcraft,” B-25 Mitchell “Tondelayo” bombers and P-51 Mustang “Betty Jane” fighter. Each aircraft was a part of the backbone of the American effort during the war from 1942-1945 and each holds individual significance as well.

The B-17 is one of only nine in flying condition in the United States. The B-24J is the sole remaining example of its type flying in the World. The B-25 is best known for being used in the daring Doolittle raid. The P-51 Mustang was awarded the prestigious Grand Champion award for restoration.

Alongside the Foundation’s visit, the BBC has requested the City of Riverside as its location to film an episode of “Impossible Engineering,” while the aircraft take their temporary residence at the Riverside Airport.