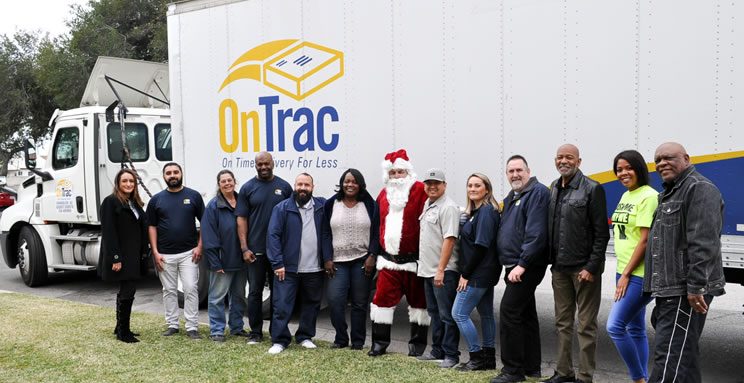 Fontana, Calif. – When 1,000 toys headed to Fontana became stranded over 60 miles away, regional package delivery company OnTrac came to the rescue. Through a single phone call, an OnTrac driver was on the road within minutes ready to pick up the presents and deliver them to Living Way Church for their 13th Annual Toy Giveaway and Resource Fair.

Fontana Mayor Acquanetta Warren received a phone call Thursday, December 13 making her aware of the presents stuck in the City of Vista. Through the Fontana Chamber of Commerce’s partnerships with local businesses who own trucks and trailers, Warren only made one call to OnTrac District Manager Mike King to secure a truck and driver.

“[OnTrac] responded immediately,” said Mayor Warren. “If we didn’t pick up the toys that day, the toys would have been donated to another organization. We had families depending on us and OnTrac saved the day.”

Not only did an OnTrac employee pick up the presents, but King (dressed as Santa) and a team of employees arrived at the church to unload the truck.

“The Fontana Chamber of Commerce reached out to me and told me the person who was supposed to pick up the toys was not going to make it. This was at 2:00 p.m. and the toys needed to be picked up before the end of the day,” said King. “At OnTrac we are equipped to handle unexpected delivery issues. I was planning to visit my sites dressed as Santa on Friday, so I offered to come along and deliver the toys to the church too.”

The toys were needed for the 13th Annual Toy Giveaway and Resource Fair where hundreds of low-income families receive groceries, toys, and other support.

“Everyone was so surprised,” said Mayor Warren. “We were just grateful to Mike and his team, but when they all showed up to help unload…and to see Santa himself as part of the effort…well, that just proved Christmas miracles really do happen.”