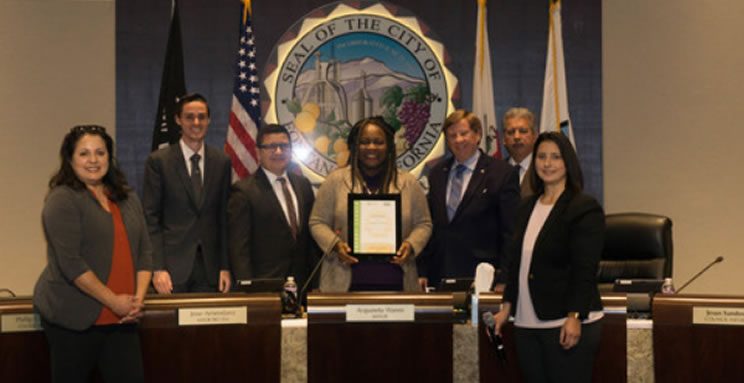 Fontana, Ca. – Representatives from Southern California Edison (SCE) and the San Bernardino Council of Governments (SBCOG) presented the City of Fontana with an award for being a local leader in energy efficient efforts through the San Bernardino Regional Energy Partnership.

City staff earned the Gold tier recognition by participating in SCE’s direct install program, an HVAC optimization program, and also converting both city-owned and SCE-owned streetlights to LED. These projects resulted in more than one million dollars in rebates and incentives. Through ongoing energy efficient efforts, the City of Fontana is on its way to obtaining Platinum in the very near future, making it the first city in the partnership to reach the top tier.

“Thanks to the dedicated and hard working team facilitating by the San Bernardino Regional Energy Program,” states Energy Efficiency Project Coordinator, Shawn Matejcek. “The City of Fontana has been able to reduce our energy savings by 3,445,977 kWh and achieved a 45 % savings from our 2006 baseline consumption, which is the equivalent of powering 425 homes in one year or removing 517 passenger vehicles from the road for one year.”

Less than a year ago, the City of Fontana was recognized for achieving the Silver tier in SCE’s Energy Leadership Model, which was accomplished by obtaining a combination of energy efficiency savings, community outreach and participation in demand response programs.