RIVERSIDE, CALIF. — History and art enthusiasts from near and far will visit Riverside, Calif. next month for the Association of African American Museums Conference (AAAM) taking place Aug. 3-6, 2016.

The AAAM conference will take place at the Riverside Convention Center, but a host of activities including some receptions are planned in various locations throughout the Inland Region.

A Gospel Concert will take place Thursday, August 4th at Riverside Community College Landis Auditorium, led by Gregory Thomas as well as accomplished musician, singer and song writer Tony Wilkins. A mass community choir of 100 voices under the musical direction of clinician Thomas will joyously lift up praises together at this special event. The mass community choir rehearsals will commence at a week-long gospel workshop, open to anyone who wishes to participate: Monday, July 25th through Friday July 29th from 7 to 10 p.m. at Park Avenue Baptist Church located at 1910 Martin Luther King Blvd. in Riverside, Calif. The workshop fee is $10.00. For more information contact 951.807.5066.

In addition to the gospel concert, Visual Voice art exhibit co-curated by renown artists Charles Bibbs and Bernard Hoyes with assistance by curator Lisa Henry will take place Friday, August 5th from 5:30 to 7:30 p.m. at the Riverside Art Museum. This exhibit covers Southern California Black artists’ ascent to the mainstream, culminating with the Black art scene in Los Angeles in the 1980s and 90s. Works of 19 masterful artists who played an integral role in what is to become the first full African American Art Movement over the last three decades includes:

In conjunction with the Visual Voice art exhibition, a Block Party with a stage of live entertainment will take place Friday, August 5th from 5:30 to 9:30 p.m. on Mission Inn Avenue near the Riverside Art Museum. Blues, Jazz and R&B performers will give a musical tribute concert to celebrate the early century era with special guests to be announced. Both the Block Party and Visual Voice art exhibition are free and open to the public.

If you are interested in being a vendor, volunteering, or for general information about registering for the conference visit www.blackmuseums.org. 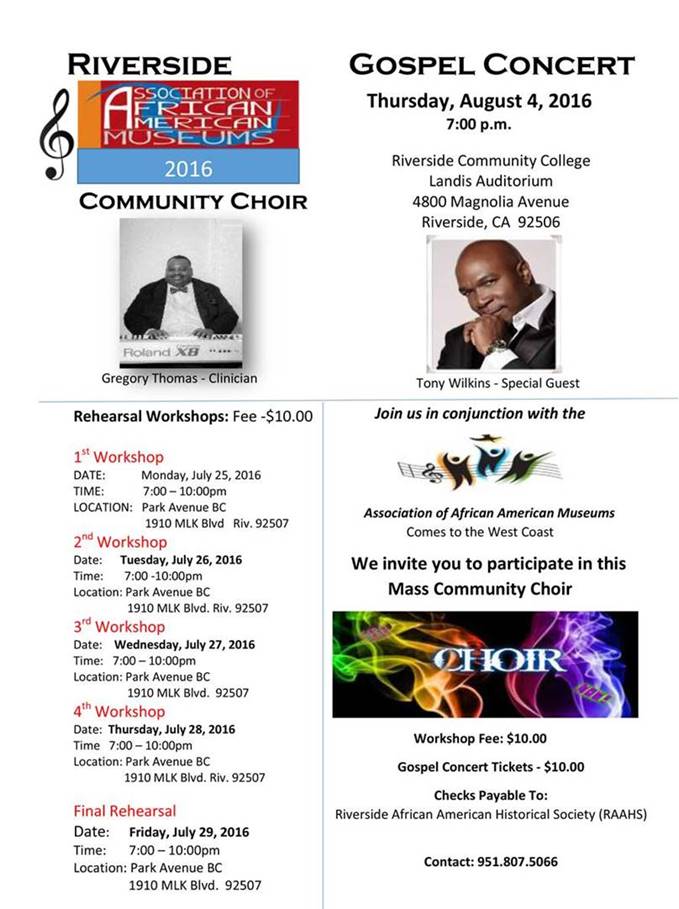