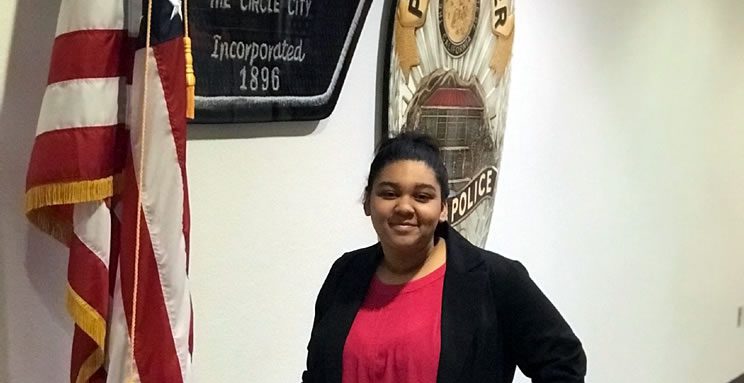 A Corona police officer volunteers with Big Brothers Big Sisters to be a driving force in a local teen’s life.

Corona, CA – As a teenager, Jessica Carbajal never had someone she could call a mentor. Today, she’s making sure others like her don’t have to navigate life alone by volunteering her time as a mentor with Big Brothers Big Sisters of the Inland Empire.

For the past three months, Carbajal has spent one-on-one time with her 16-year-old “Little Sister” Sally, who struggles with depression and bullying at school. Despite being in the early stages of their match through Big Brothers Big Sisters, the pair have already shared a number of memorable experiences together.

“I’ve tried to open her eyes to a lot of new things and be the role model I always wished I had,” Carbajal said. “It’s definitely been a humbling experience. I think I’m getting just as much from her as she is from me.”

For Carbajal, the most memorable moment so far came when she brought Sally for a ride-along during one of her shifts as an officer with the Corona Police Department.

In order to make that ride possible, she had to first find Sally some adequate business casual clothing to wear for the outing.

“I couldn’t have her show up in jeans and a T-shirt, so I took matters into my own hands,” Carbajal said. “I wasn’t going to let that get in the way of the ride-along.”

She reached out to Corona Police Department detective and Big Brothers Big Sisters board member Andy Bryant, who connected her with a group that provided a generous donation for new clothes.

When the day finally came, she made sure to expose Sally to the daily realities of her job.

“She got to see firsthand the kind of situations and different types of people I deal with on a regular basis,” Carbajal said. “At one point, Sally saw me interact with a very hostile individual, which was an eye-opener for her. She was amazed that someone was able and willing to talk to us in such a hateful manner.”

Sally was so inspired by the outing that she switched her college prep work from education to law and public safety. The police department only allows one ride along every six months, so Carbajal said she plans on opening up the opportunity to Sally once again as soon as they are eligible in the fall.

According to Sally’s mom, the positive impact of having Carbajal as her mentor has become evident in her daughter’s life in and out of the classroom. For the first time, Sally is motivated to go to school and give her best possible effort every day. Sally even expressed interest in training for a 5K race alongside Carbajal.

Big Brothers Big Sisters has been beneficial volunteer opportunity for Carbajal as well, with opportunities to experience some of her favorite things from a new perspective.

“They’re both taking each other out of their comfort zones,” Andy observed. “[It’s] so awesome.”

Whether it’s going on a trip to the Getty Museum or taking Sally to try her first cup of frozen yogurt, Carbajal always ensures her Little Sister has something exciting to look forward to. These activities are the foundation for a mentoring relationship that will help Sally build trust with an adult who is truly invested in her long-term success and well-being.

“At her age, I would’ve loved to have someone like me around,” Carbajal said. “I encountered a lot of issues with school and was headed in the wrong direction but luckily I was able to turn myself around. If I had somebody there to guide me, life would have been so much easier.”

Those interested in volunteering as a mentor with Big Brothers Big Sisters of the Inland Empire can visit www.iebigs.org/volunteer or call 909-763-5959 to learn more.