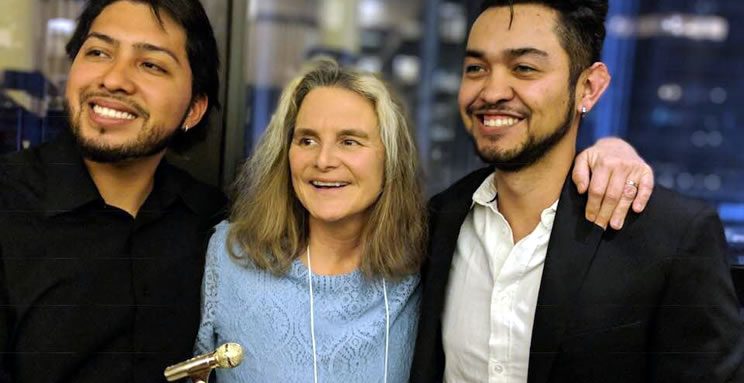 San Bernardino, Ca. – Although the “My Awesome Empire” radio program at Cal State San Bernardino has concluded its sixth and final season, the show ended on a memorable high note. Officials for the Intercollegiate Broadcasting System in New York named the CSUSB program as one of this year’s finalists for an international Golden Mic Award for Best Public Affairs Program.

The program that was recognized paid tribute to San Bernardino in the aftermath of the North Park Elementary shooting in 2017, focusing on the good things in the community. CSUSB graduate student Arnold Robles and communication studies undergrad Adrian Silva Vizcaino produced the edition. The show, titled “San Bernardino; Stories of Rebirth,” can be found online at Season 5, Episode #128.

“Being recognized internationally for my work on ‘My Awesome Empire’ was such an amazing feeling,” said Silva Vizcaino. “It feels great to know that even working behind the scenes or in a small production room really pays off — or even better, gets nominated for a Golden Mic Award. It was truly an experience in which I will never forget.”

The recognized edition of “My Awesome Empire” also featured stories about local residents who are helping to rebuild lives and the community in unique ways. San Bernardino’s “Generation Now” is featured in one story. The group has combined the efforts of student government presidents from various local universities and colleges, as well as young business and youth leaders. Together they are working on innovative business strategies for San Bernardino.

The episode also featured renowned poet Lydia Theon Ware I. After finding treatment for a chemical imbalance that caused her severe mental health issues and homelessness, she earned her college degree, became a facilitator working with the mentally ill and homeless of the Inland Empire, and is now a respected author.

“My Awesome Empire,” which was produced by the College of Arts and Letters and Coyote Radio and Advertising students, was broadcasted over eight Southern California radio stations. The program wrapped up its final season in late February.

“This is an extraordinary way to close out our program on a wonderful high note,” said Lacey Kendall, executive producer of the program and broadcast consultant to CSUSB.

“My Awesome Empire was such a great show because it told the stories of amazing people and their contributions and upbringings in the Inland Empire,” said Silva Vizcaino. “Their stories were very inspirational and motivating stories in which everyday listeners can hear and be moved by such greatness, to even inspire people to execute their own hopes and dreams.”

For more information about My Awesome Empire and Coyote Radio and Advertising, call (909) 537-3486.

Also visit the My Awesome Empire website at myawesomeempire.com to listen to archived episodes.