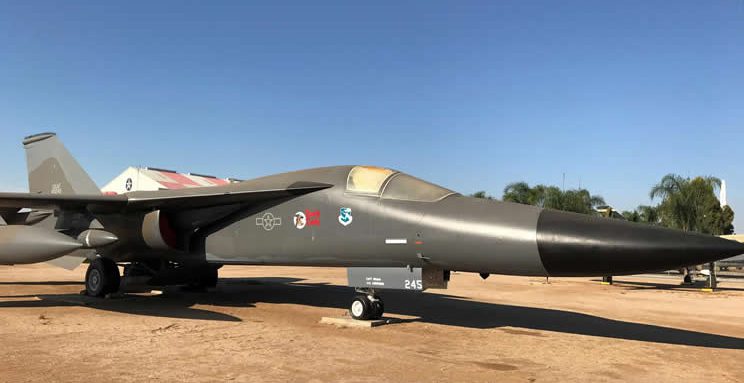 RIVERSIDE, Calif. – March Field Air Museum is proud to announce the seventh installment of “Up-Close Aircraft Days” on Saturday, July 14, 2018, from 11 a.m. to 3 p.m. As part of this new interpretive program, a different aircraft is featured each month with the next focused on the Fighter-Bomber FB-111A Aardvark. On the second Saturday of each month throughout the year, Museum guests will have the opportunity for a close-up look – sometimes climbing stairs to get a close-up view into the cargo bay or cockpit, other times even climbing aboard.

For the upcoming “Up-Close Aircraft Day” focused on the FB-111A, guests will see how this long-nosed bomber pioneered several technologies for production aircraft, including variable-sweep wings, after-burning turbofan engines, and automated terrain-following radar for low-level, high-speed flight. On this day, visitors to March Field Air Museum will get an up-close view of the Museum’s Aardvark, peering into the bomb bays and also looking into the cockpit at close range. Designed as a modification of the legendary General Dynamics “swing-wing” F-111 fighter-bomber, the FB-111A served in the U.S. Air Force Strategic Air Command from 1968 until 1991. The FB 111A supported the third leg of the U.S. Triad Nuclear Deterrent strike-force, consisting of manned bombers, intercontinental ballistic missiles and submarine-launched ballistic missiles. Its variable wing design, extending out for slow-speeds and sweeping back for high-speeds, allowed the aircraft to operate a peak performance in sub-sonic and supersonic flight.

The FB-111A was equipped with advanced electronics including an improved attack radar, internal navigation system, digital computers and multi-function displays to support its role as a nuclear-armed strategic bomber. U.S. Air Force F-111 variants were retired in the 1990s, replaced by the

F-15E Strike Eagle for medium-range precision strike missions, while the supersonic bomber role has been assumed by the “Flying Wing” B-1B Lancer. The Royal Australian Air Force was the last operator of the F-111, with its aircraft serving until December 2010.

To preview the next “Up Close Aircraft Day” happening in August, a World War I French aircraft first introduced in 1916, the Nieuport 11, will be showcased. The Museum’s website features extensive information on each aircraft in its collection of more than 80 total, for those wishing to learn more.  Knowledgeable museum docents, dressed in period uniforms whenever possible, will be on hand to assist visitors, provide information and answer questions. The March Field Air Museum website will list upcoming “Up-Close Aircraft Days” and the featured aircraft each month; for more information, visit www.MarchField.org/calendar.